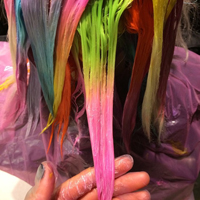 Nylon co-founders Marvin Scott Jarrett and Jaclynn Jarrett are at it again, creating a targeted media platform, this time for young girls called PopularTV. The media platform includes a series of videos by various people that tap into the YouTube generation of viewers. Hayley Williams from Paramore is a part of the package. Starting on […]

Pool continues to show that trade shows can stand apart -even if it’s within the same hall as others -based on the quality and uniqueness of its exhibitors and buyers.

While just 6 months ago, mini-trade shows were a part of the trade show season landscape during MAGIC in Las Vegas with shows such as FoShoFoShow and Unity representing smaller subcultures of the industry, the only independent fashion trade show this time around from February 13-15 was United. Clearly the economy has taken its toll, yet there remains a determined group of brands, buyers, and trade show entrepreneurs who challenge the behemoths of the show industry.