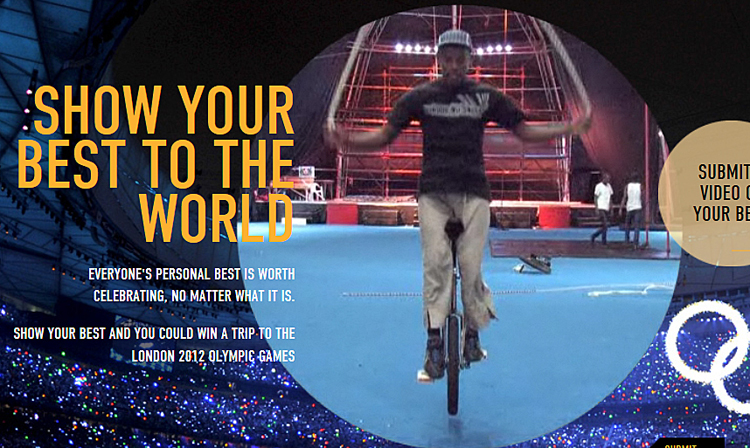 The Olympic Games continue to try and engage people, particularly youth culture, through a variety of campaigns that often completely miss the mark, mostly because the sports they profile are rarely on the radar among a new generation. However, we will give them some cred for their latest new social media program called “Show Your Best” which invites people around the world to send in videos of them achieving their best at a sport.

What’s funny (and probably acts as a feeder program) is that the “best” includes whatever you consider to be a sporting activity—a topic which has been much debated over the last few years from those in action sports and those on the Olympic committee. Our favorite video is the guy pogo-sticking while jumping rope. And from what we’ve seen so far, there are many parkour entries indicating this may be a good feeder-sport for the future. Pole dancing, believe it or not, is also gaining popularity to the point where the London Games are supposedly going to incorporate some top women pole dancers in the opening ceremonies.

The hub where you can see what people have sent in so far is at www.olympic.org/showyourbest which also includes older video footy of Olympians doing amazing feats that people can upload and incorporate into their videos then of course share it with friends.

Timo Lumme, Managing Director of IOC Television and Marketing Services, said: “We wanted to create a campaign that would reach and engage young people – by building a correlation between “Olympic best” and everyone’s personal best. Not everyone can be an Olympic athlete, but everyone can strive to be their best at something. This campaign celebrates that effort.”
In a run-up to the Olympic Games in London this year, top spots from the video entries will be chosen by a panel including Olympic athletes to air during the weeks leading up to the games.

Meanwhile, if your video gets considered, sponsors will give you “prizes” including a Samsung phone, Swatch watch, or Panasonic camera. Obviously, this campaign is one way that the IOC is hoping to engage sponsors in more ways that during the Games themselves. They are also running this on their FB, Twitter, Flickr and YouTube channel.

Stay tuned for more once the Winter Youth Olympic Games rolls around later this month.