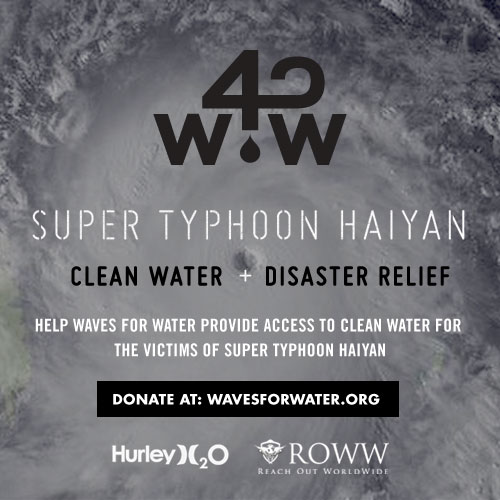 The largest storm ever recorded has left over 1 million people without clean water in the Philippines. Waves For Water non-profit, with the support of Hurley H20 is currently asking for support to get clean water filtration systems into the area.

New York, NY // Nov 8, 2013 – Waves For Water founder Jon Rose is mobilizing an urgent clean water disaster relief initiative in response to the Super Typhoon Haiyan, currently decimating the Philippines. Donations can be made to support this effort at: http://www.wavesforwater.org/typhoon-haiyan.

The initial goal is to help mitigate some of the immediate suffering by providing victims with access to safe water by distributing portable water filtration systems to community centers, refugee camps, and individual families in affected areas.

With several people missing and 10,000 feared dead. The death toll is expected to sky-rocket within the next 24 hours as so many affected areas have been without help or contact.

“While we don’t respond to every single disaster that happens, it’s a large part of what we do and the scale of this particular event is shaping up to be right in-line with our organizational purpose and structure.”– Jon Rose W4W / Founder.

Over the past four years Waves For Water has worked on almost every major global disaster, earthquakes and tsunamis in: Indonesia, Haiti, Japan, and Chile, mega-floods in Pakistan, India, and Brazil… and specifically the comprehensive initiative in response to “Super-Storm-Sandy” here in the U.S. Waves For Water is well versed in first response disaster relief and equipped to not only respond to these types of catastrophic events, but do so quickly and efficiently.”

Jon and his team will be kicking this project off as early as next week with over 200 water filtration systems providing up to 20,000 typhoon victims with access to clean water almost immediately.

“We had the privilege of working with Waves For Water in the aftermath of the Chilean earthquake in 2010, joining forces again now is a natural fit. Simply put, we are two like-minded organizations coming together to make a greater impact.”–Lucas Wimer / ROWW / Director of Operations.