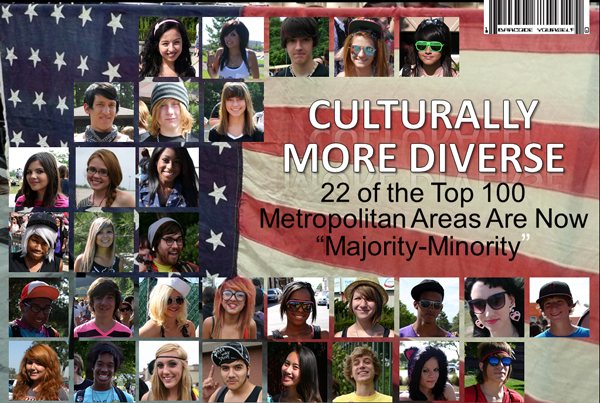 Slide from Label Networks on the changing dynamics of the United States ethnicity and population groups.

Immigration policy has a great effect on the changing dynamics of today’s youth culture across the United States, not just in terms of legality, but also for future cultural status, personal identity, and lifestyle influences.

Overall, 22 of the top 100 metropolitan areas in the U.S. are currently majority-minority. And it’s not going to reverse the other way. As we outline in our Youth Culture Studies, and most recent, Sustainability and The State of the Future Youth Culture Study, the effects of the changing dynamics of the ethnic break-down of the United States is already having an enormous impact on brands and how they need to do business (see more in our upcoming Spring Youth Culture Study 2013). The fastest growing ethnic group, especially among youth culture, is Hispanics.

In California alone, the percentages of Hispanics to Caucasian will be equal by next month, with Hispanics becoming a larger population group by 2014. By 2040, the United States population overall will be majority-minority (as ironic as that sounds), meaning that the landscape of youth culture, the demographic leading the change, will be far different than it is today. 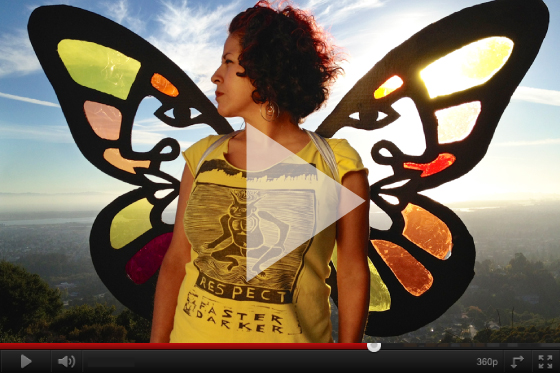 Artist Favianna and the symbol of the migrating Monarch Butterfly.

Many artists including street artists such as Shepard Fairey and musicians such as Zach de la Rocha from Rage Against the Machine, have been creating work or speaking out in the last few years about immigration policy and reforms that are facing our nation. Favianna, an Oakland, CA based artist is among the leaders of this movement through Voice of Art, dealing with the anti-migrant rhetoric taking place, and extending back to 2009 when she launched presente.org spurred on by the CNN commentary of Lou Dobbs. (Dobbs, after considerable pressure, resigned.)

Last week, the 3-part series of her documentary about art and activism was released on Pharrell Williams YouTube channel. The documentary features many other pro-migrant artists, and highlights CultureStrike, the organization Favianna co-founded two years ago to help organize more artists around the fight for migrant rights. It also highlights two of her collaborators, including Pulitzer Prize–winning journalist and undocumented activist Jose Antonio Vargas; and undocumented queer artivist, Julio Salgado. 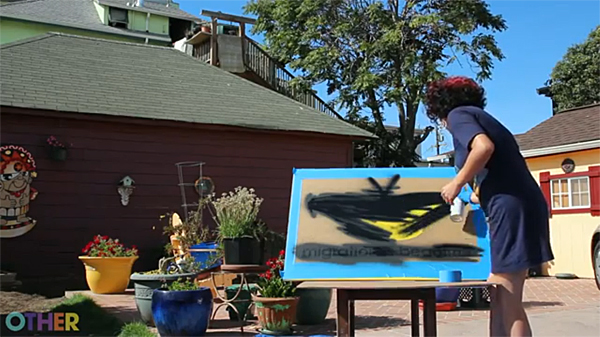 Favianna working on her latest projects.

According to this Vargas, this country is having the same conversation in the same paragraph: NAFTA allowed free rein for corporations to go to other places for lower wages. Land grabs started taking place, displacing farms and land that were previously owned by families. Low paying jobs where becoming less available, so people went to USA to find work. In the end, “immigrants are a scapegoat for things that have gone wrong in this country.”

As Vargas questions in the documentary, “Who at the top is making profits for cuts to public services and our work? Immigration is not a south of the border or a brown thing…explain why people are moving. “Peace migrates” –just look at the Berlin Wall, Great Wall of China, not just the Mexican border.”

The symbol for Favianna and Vargas is the Monarch butterfly because its pattern of migration is from Mexico to the USA to Canada and back. Through this symbol and her artwork, social media, and supporting fans, they have been able to have an influence on changing the conversation of immigration.

But as they put it, “Arizona is the ultimate failure of immigration policy.” Because of this, Favianna and others headed to Arizona to continue their work for a cause.

Check-out the latest in the documentary series, Voice of Art–Migration is Beautiful.