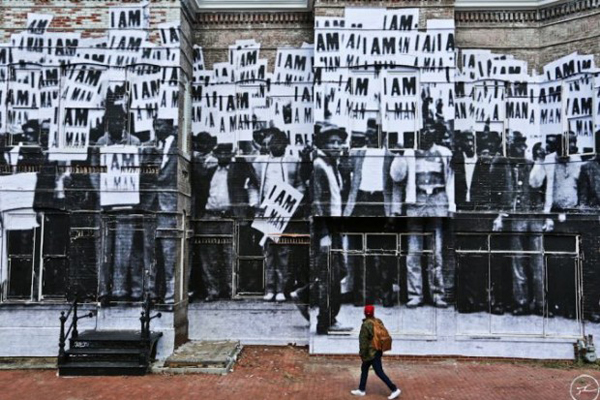 Street art and artists continue to gain notoriety and cred in both the entertainment world and fashion as indicated by the latest developments including the launch of MOCAtv and their Artists in the Streets series, and ongoing collaborations with top designers such as RETNA’s collab with a new collection from Louis Vuitton. Here’s the scoop.

MOCAtv Art in the Streets series airs each Thursday evening, and started on October 18, 2013, featuring latest works from JR, Barry McGee, RETNA, Swoon, and others. In addition, the series highlights various innovators of the street art movement from an historical perspective including one of our favorites by Craig R. Stecyk III.

JR was the latest to be featured with his “The Wrinkles of the City Project” which brings to the forefront the architecture of a city combined with the black and white photos of the city’s older inhabitants.

According to filmmaker and photographer Carlos Gonzales, who created the latest clip of JR for MOCAtv, “JR links the memory of the elderly and the architecture of the cities marked by the scars of history, their economic development, their socio-cultural changes. By meeting and photographing these people to paste their portraits on the walls, JR imagines the wrinkles on their faces as the marks of time, traces of life mixing with the history of the city.”

JR was also just completed a massive mural in Washington D.C. as part of his “Unframed Project.” The mural extends from 14th Street and T streets in D.C. which was known for the riots after the assignation of Martin Luther King, Jr.

The ongoing collaborations with street art and fashion have come to an all-time high with RETNA’s latest collaboration with Louis Vuitton. The collab was kept under wraps but various Instagram images made the rounds, featuring a new colored scarf with signature RETNA fonts and the LV signature.

Obviously this isn’t the first time that a top street artist has collaborated and given cred to established houses of design, but it does go to show that the bridge has been crossed and although street art is still considered illegal, its popularity in mainstream culture is infiltrating more than streetwear, but also high-end fashion.