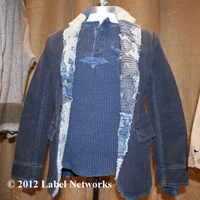 This Fall, expect a wide spectrum of genres particularly in the United States, when it comes to streetwear and urban contemporary outerwear, especially jackets. In higher-end streetwear (what Bread and Butter types call “urbanwear” which in our American eyes would be mistaken for say, Fubu, and why no one here dares call cutting-edge brands like […]

Nothing like a secret fashion show where the location is revealed the day-of%u2026and it happens to be right in your %u2018hood.

Pool Fashion Trade Show kicked-off a special event June 7th called “Concept to Creation” which in many ways indicates their new direction of focusing on fashion design and the designers themselves rather than just art and fashion. With invites featuring designer sketches, rulers, swatches, and pantone color flip books, you can see how the transition is making a special emphasis on the designers behind the brands that will be a part of their upcoming trade show August 26-28 in Las Vegas.

One of the more notable post-gender fashion movements of summer has been the incorporation of vests as a key styling piece. First seen in Texas, New Mexico, and Florida, the styles captured pockets of leading-edge fashion players across the U.S. and Canada. Fresh photos from Label Networks deliver the scoop.