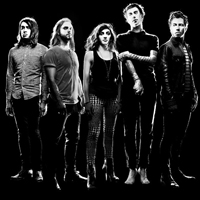 Gold medalist Shaun White this year had a good reason to miss the X Games in Los Angeles last weekend. He and his band Bad Things, were playing two different sets at Lollapalooza and ramping up for their debut album release which took place October 8, 2013 on Warner Bros. Records. Bad Things , which […]

Giant social networks are sick of watching Apple make a killing off music and they’re jealous as hell. Not to mention that they still don’t have a business model%u2026yet. Plus fresh data from LN’s Fall Study on music and technology.