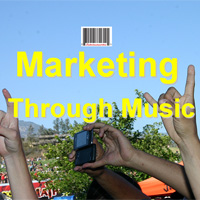 Quantifiably one of the most powerful tools to reach a new generation, effective marketing and sponsorship through music is still often overlooked by many brands. Here’s data on what works best and why.

Marketing through music is the way to go for brands looking to launch effective grassroots campaigns. Here’s a quick look at what’s going on for 2010 so far.

Country Throwdown -In the Spirit of Vans Warped and Rockstar Mayhem, Kevin Lyman and 4 Fini Launch a Country Music Tour

A traveling country tour in the spirit of Warped featuring a diverse line-up, pre-show tailgating, singer-songwriter contests, and lifestyle attractions should make for an historic American tour.

Giant social networks are sick of watching Apple make a killing off music and they’re jealous as hell. Not to mention that they still don’t have a business model%u2026yet. Plus fresh data from LN’s Fall Study on music and technology.

The highly-anticipated documentary on the history of the guitar featuring 3 generations of legends, Jimmy Page, Jack White, and The Edge draw star-studded crowd for must-see new movie sure to impact audiences globally.

Celebrating its 15th year, Kevin Lyman presented to music industry press and fans what to expect from Warped this summer, including top bands making an impact.

Changing Preferences in Music Venues, Formats, and Shows Quantify Where Things are Headed Not Only for Future Live Music Draws, but Sponsorship Opportunities

A new generation of music fans are demanding significant changes in where and what format works best for them.

When we first met Lin Lin from the brand Eno in 2007 at United Fashion Trade Show, we were intrigued by her passion for her home city of Shanghai and the inspiration taken from her country when it came to the emerging China youth and street culture scenes, including rise of indie bands, social networks, and corresponding lifestyle apparel. We met up with Lin Lin and her partner Yvette again at MAGIC in the South Hall last month where they represented not only one of the few women’s contemporary streetwear brands in the area (despite the growing marketplace), but also were the only ones from Shanghai–a burgeoning hotspot of designers and rockers inspired by street culture.