Last weekend, June 28-July 1, 2012, downtown Los Angeles was transformed into the platform for the X Games, often referred to as the alternative Olympics by action sports fans. Events ranging from skateboarding vert and street, to BMX in the same disciplines, freestyle motoX, and rally car racing make for a packed weekend of events of professional competition.

The X Games have changed considerably over the last decade, with moto events taking over more than anything else, but based on the size of the sponsorship village and tens of thousands of fans that show up each year, the X Games continues to have a strong presence. Last weekend, they also announced an expansion of the X Games into Brazil, Germany, and Spain for 2013.

Noticeably absent this year was Shaun White who opted not to compete in the skateboarding vert competition, but his presence seemed to be everywhere with gigantic billboards from Target featuring the gold medal winner around the venue. The event also featured a private kick-off concert with Linkin Park at Club Nokia, and an exhibition  by Hot Wheels going for its second world record with a two-driver, six-story tall vertical loop called the Double Loop Dare.

One of the most highly anticipated events of the X Games is the Freestyle MotoX event. 10 riders tackle a complex course of different jumps. Judging is based on tricks, execution, style, and use of the various course ramps and landings. This year, the gold medal went to Japan’s Taka Higashino, the first of his career, landing a never-before completed trick that took him six years to perfect.   “This is my last competition, I’m retiring now that I have the gold,” Higashino said jokingly. “Now I’m looking forward to getting my green card on Saturday.”   Opening up his first run, Higashino launched with a Rock Solid backflip, a trick that had yet to be landed in competition, not to mention one that most believed he would save for Moto X Best Trick on Friday where he’ll be looking to land back on the podium after finishing with a bronze in the event in 2010. 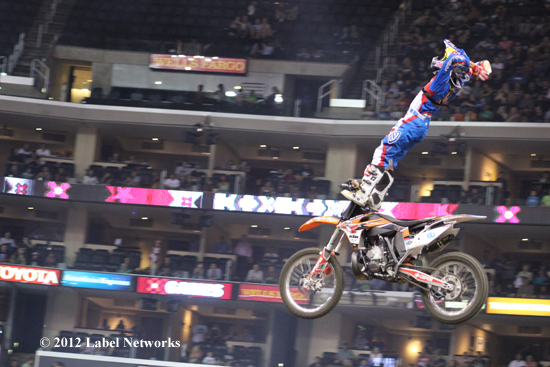