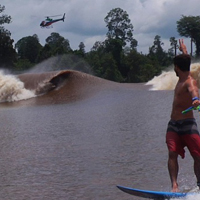 This year’s pro surfing events are moving into their final leg as the competition heats up, winter swells deliver epic waves, and the World Titles are determined.

Not to be outdone by Target’s new collection from Shaun White, Laird Hamilton’s with Steve and Berry’s, nor Wal-Mart distributing OP, Kmart has announced a sort of soft launch of their new action sports inspired collection called “Boarding” to be released in 100 “strategically located” stores this summer (and a possible roll-out to another 1,400 later in the year). While the name is obviously boring, what’s interesting is that the Boarding logo looks like a mash-up between Quiksilver and Rip Curl.

In Part 2 of the ASR Fashion Show story from the trade show last week, January 24-26 in San Diego, Label Networks delivers images of top brands in action sports and trends in lifestyle apparel relating to this industry.