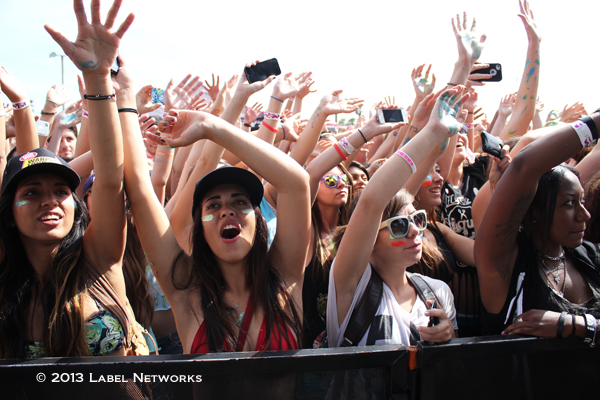 Warped fans go crazy, often seeing their favorite band for the first time at this tour.

Widely known as America’s youth culture rite-of-passage to music entertainment, the Vans Warped Tour is rolling across the country for the 19th year in a row, attracting more than 500,000 young people during the 40-event tour. Kevin Lyman, the founder and producer, and his team, along with icon Steve Van Doren, have created the ultimate formula for creating a fun, successful music tour that captures the elements of what’s wanted among today’s youth culture.

Since 1995, Warped has been breaking up-and-coming indie talent as well as both creating and showcasing major established artists, starting back in the day with Ice-T, Eminem, and No Doubt. The big question is which bands will be the break-out bands of the summer of 2013—stay tuned for our “Bands of Summer 2013” posting soon. As the tour rolls across the country, a traveling carnival of 700 people which is also captured in the Fuse TV reality show “Warped Roadies,” and the viral effectiveness of favorite bands pitches to an extreme among a new audience of attendees, culminating not only in new bands breaking into top genres, but a variety of sponsors hitting mainstream madness, and fashion trends envious of designers who watch this tour for creative youth culture DIY styles. 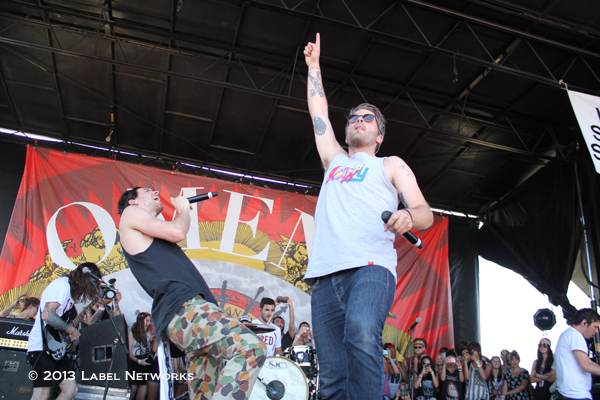 This year, Warped kicked-off June 15 in Auburn, WA at White River Amphitheater and will wrap-up August 4 in Houston, TX at Reliant Park before setting off an international journey throughout various countries in Europe. The theme this year, “Best Day Ever” is already catching fire with young people creating their own T-shirts with the statement and sharing their adventures on a variety of social media as the tour travels across the country.

The multi-stage line-up includes Sleeping With Sirens, Black Veil Brides, We Came As Romans, Motion City Soundtrack, The Wonder Years, Bring Me the Horizon, Reel Big Fish, Crown The Empire, The Story So Far and many more. A mix of hotly-tipped and established artists such as 3OH!3, the Ataris, The Used, and Big D & the Kids Table round-out the tour, making it the most eclectic traveling festival tour on the planet featuring rock, punk, pop, hip-hop and rap, metal, indie rock, electronic, alt-country, folk-punk, dubstep, reggae and rockabilly. 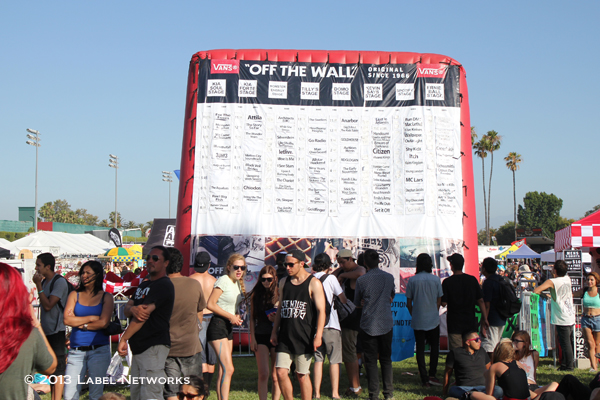 The band line-up blow-up is a tradition. Bands and set times are announced at the beginning of the each date and switches for each show, creating an element of surprise for fans and the bands.

In addition, due to major success last year, fans can check-out an expanded Acoustic Basement, which features established and up-and-coming acoustic artists, such as William Beckett, Allison Weiss and The American Scene. New to the tour this summer is the Spotify Stage, which showcases such EDM and hip-hop artists as Crizzly, Outasight, Wallpaper. and Stephan Jacobs, to name a few.

The traditionally low ticket price is one reason Warped Tour is such a huge hit with young people, but also, it’s the best place to discover new music and shop for eclectic merch, participate in a variety of fun sponsorship programs, and gather eco-awareness information and more in an entire non-profit village. 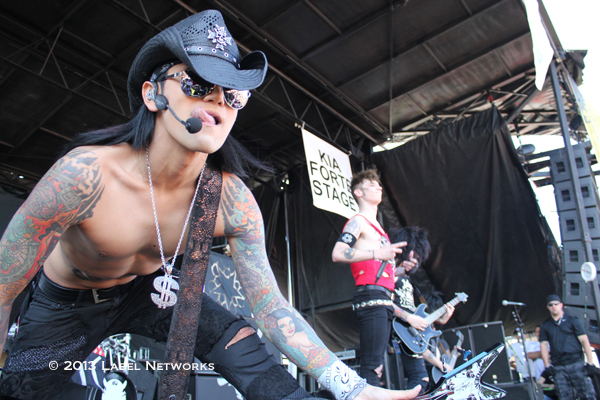 Black Veil Brides are busting out this summer.

The tour is also known for its philanthropic capacity, helping those in need such as through Feed Our Children Now! Which collects hundreds of pounds of canned food from fans before each show in exchange for a cut-the-line pass. The food is distributed to local food banks in each city the tour is playing in. They also collect old cell phones to be recycled and disposed of environmentally.

There’s also the Warped Eco Initiatives (WEI) which focus on making the tour more environmentally friendly whether it is through eco conscious catering for the artists and crew courtesy of Tada Catering or a solar-powered sound system on the Kevin Says Stage, biodiesel for the trucks, plastic bottle pick-up contests where winners get to go on an exotic eco-adventure, and transportation options such as Rock & Bus which provides round trip shuttles to venues. 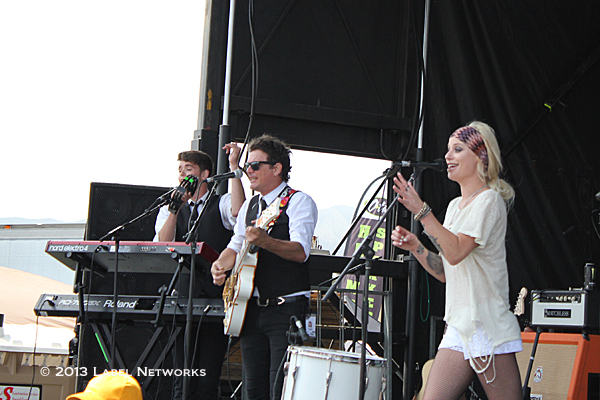 Gin Wigmore is another break-out performer on the tour.

Festival fashion has turned another corner as seen by the first week of shows with retro styles such as high-waisted shorts, denim-cut-offs, and 70’s flower power motifs going strong. Graphic T-shirts with animated characters and super-human themes are coming in, ranging from Superman T-shirts to batman knee high socks. 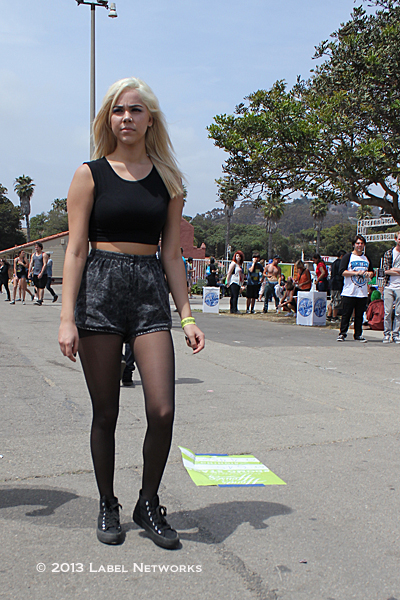 Also trending are festival boots paired with gym socks or over the knee black leggings. Skate influences are also popular but with a nod to a darker, more metal feel than pop punk or emo. However bright denim, skinny denim, and neon colors—a nod to EDM—are still a popular choice among today’s youth culture and it comes to the forefront on the Warped tour this year. Stay tuned for more fashion stories posting soon.

Overall, the Vans Warped Tour 2013 is providing many “Best Days Ever” for thousands of young people across America. As Kevin Lyman described it, “After 19 years, I’ve been lucky enough to have hundreds of Best Days Ever, each one inspiring me to do the next.” 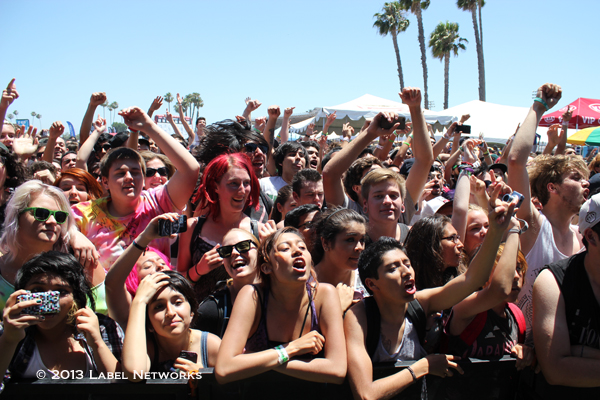 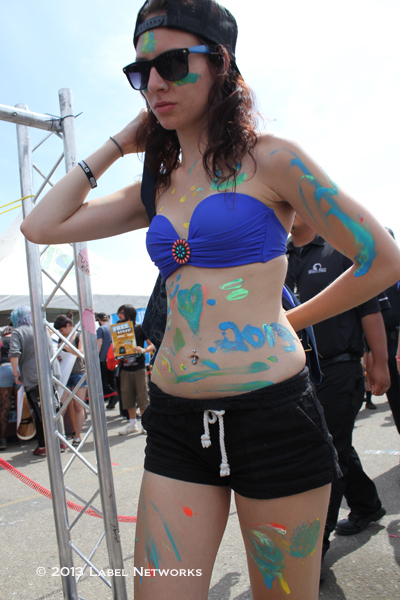 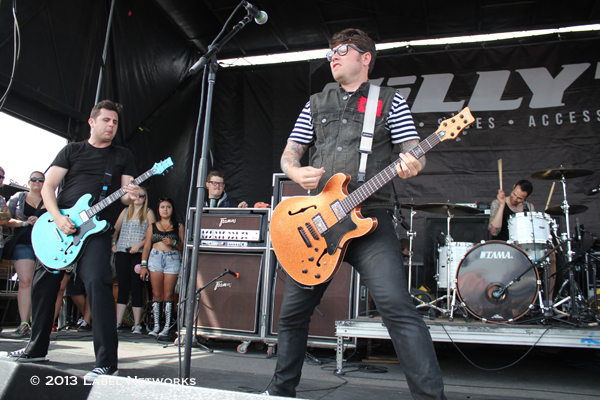 The Ataris have been on Warped 6 times. Huge favorite. 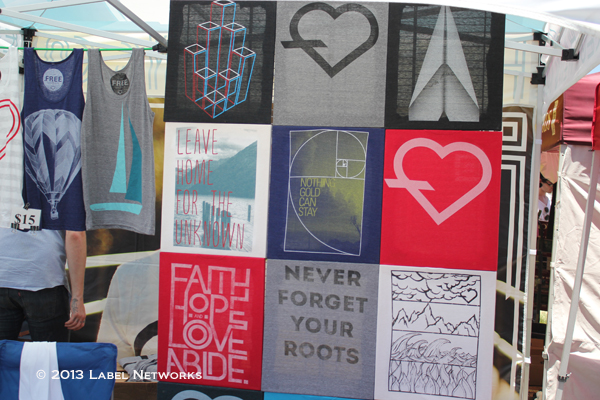 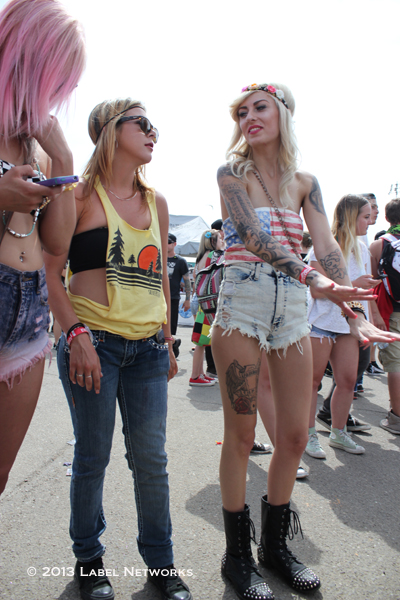 Purple, pink, or blue hair dye are hot, along with Americana motifs and denim paired with boots. 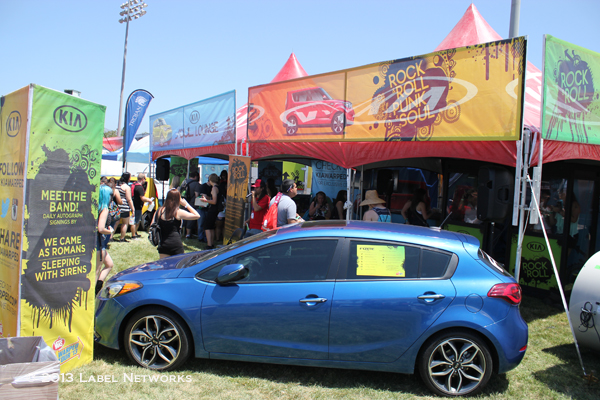 KIA is one of the major sponsors once again, and hosting the 2 main stages. 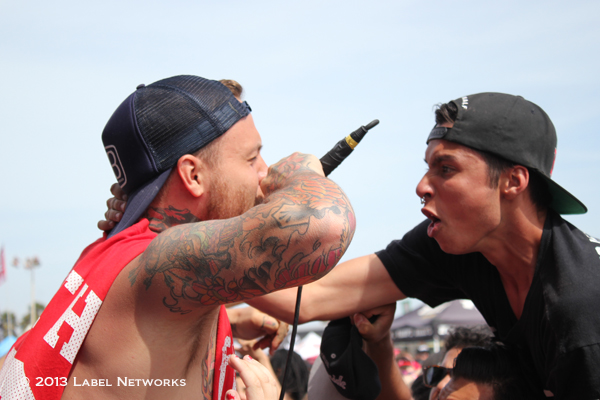 Stick to Your Guns is massively popular among young guys. 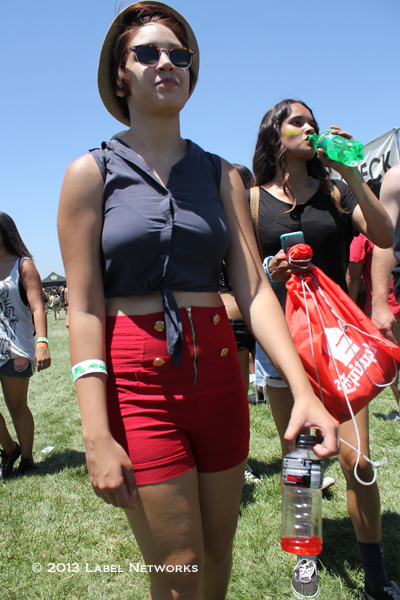 A nod to retro, punk and rockabilly among fashion trends. 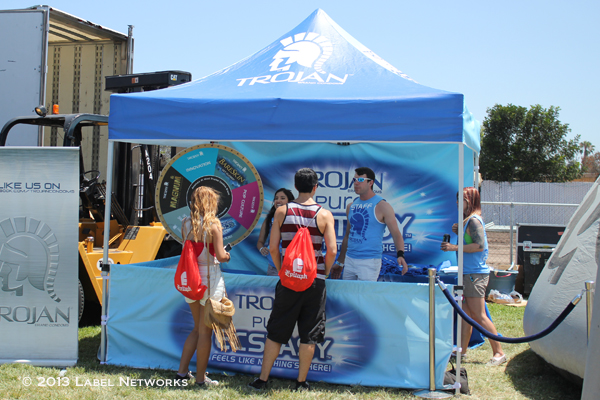 Trojan is back out on tour and popular including their huge blow-up. 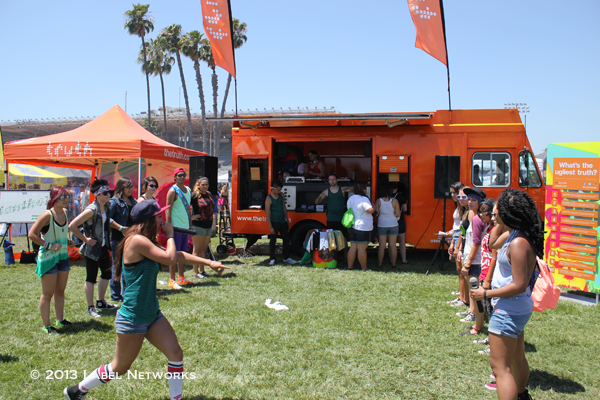 The truth and their orange truck works the crowd and offers up info on anti-smoking while engaging the audience in a variety of fun activities. 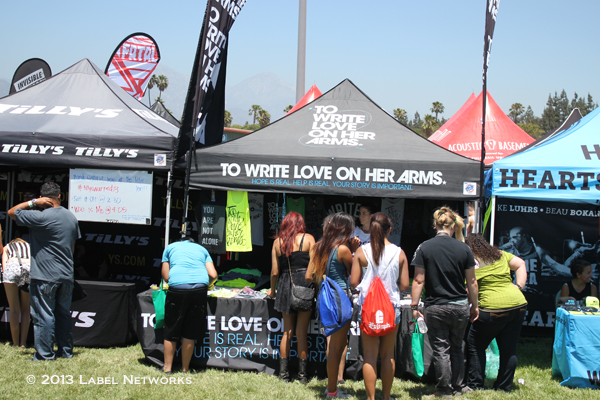 To Write Love on Her Arms is a key feature among the non-profits on-site. 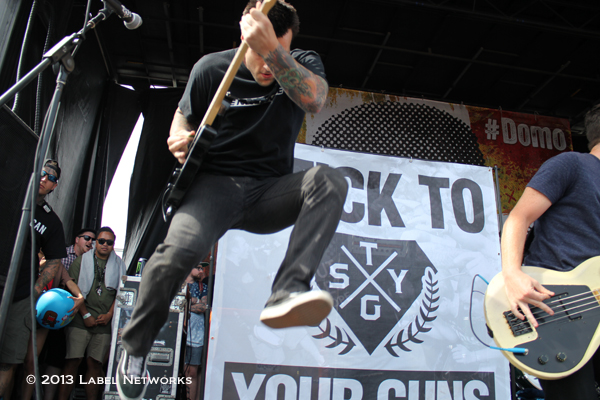 Stick to Your Guns goes off. 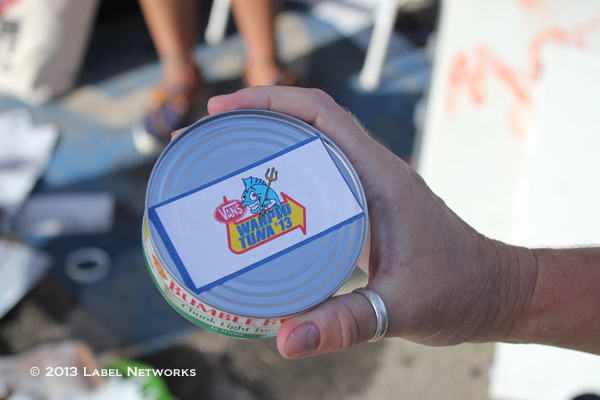 A festival-goer got creative and made a “Warped tuna can” for Feed Our Children Now!