The Hunger Games: Catching Fire which premiered this past week not only broke box office records, bringing in $307 million in the first weekend, but has also inspired the fashion industry, particular high-end designers to launch film-inspired collections, videos, Tumblr blogs, and magazines. The latest to note is Capitol Couture by Trish Summerville, the designer behind the second series in which we see Katniss Everdeen (Oscar winner Jennifer Lawrence) dressed in a wide range of high-end fashion, huntress outfits, and futuristic sportswear.

It’s not uncommon that movies inspire fashion designers. From “Sex and the City” fashion designers, stylists, and fans to the recent “The Great Gatsby” by Baz Luhrman and Prada designs, fashion designers have been inspired by movies. However the latest craze for the Hunger Games is one of the few high-end designer connections with young adult movies and marks a unique high-low collaboration between youth markets and couture.

Summerville, who also created the fashion around “The Girl with the Dragon Tattoo” in 2011, making Rooney Mara into a Goth-punk character, has done it again with creating fashion that fits the world of Panem.

Net-A-Porter is currently running an entire 16-piece collection inspired by the Hunger Games trilogoy and Summerville’s designs, taking a look at each character and the lines they say within the movie, and creating contests around various apparel favorites. It’s becoming a successful marketing campaign not only for the movie, but for the designers within the films, particularly Summerville who has perfectly imagined the books via fashion and accessories.

From tightly fitted “Kat”-like suits, to T-shirts with screen-printed “Girl on Fire” motifs, to high-end feathered leather pieces, ranging in prices from $75 to $995, the collection which launched on Monday is outstanding and continues to inspire Tumblr followers endlessly.

According to Summerville, “For a Net-A-Porter client that is interested in our line, it piques their interest if they don’t know the film, they’ll go then see the film.”

Other aspects of the collection is how the capitol world of Panem comes to life, and the role that “revolutionary” fashion now comes into play, taking on the recent streetwear camo/Americana trends of rebel style. Huntress pieces, dark green, leather/black coal outfits similar to what Katniss wears in the chariot, are all a part of this new edge.

Of course the most stunning are some of the high-end pieces, wedding gowns of Katniss, and Cinna, the stylist, played by musician Lenny Kravitz.

The other edge of high-end revolutionary couture can also be seen around the outrageous character, Effie Trinket, and her kabuki style. According to Capitol Couture, actress Elizabeth Banks, who plays Effie, said her character’s high-fashion looks represented a bigger picture of the film’s theme of revolution.

For example, Summerville said one of the fitted dresses she was most pleased with was adorned with hundreds of feathers painted to look like Monarch butterflies, taken straight from the Alexander McQueen spring/summer runway. Banks wore the dress with high heels and a butterfly hair piece.

“Everything is uncomfortable, everything is constricted, and that’s also a really strong reminder of the society they live in. Their only freedoms come in the form of personal adornment, they don’t have true freedom yet,” Banks said.

Overall, the Hunger Games trilogy is catching fire in more ways than viewers watching the movie series. Like the Twilight series, merch-inspired apparel is soaring high, but so too are designs for an edgier, futuristic fashion apocalypse that sometimes makes us feel that Panem and Capitol Couture is eerily too similar to where the world is headed in reality. 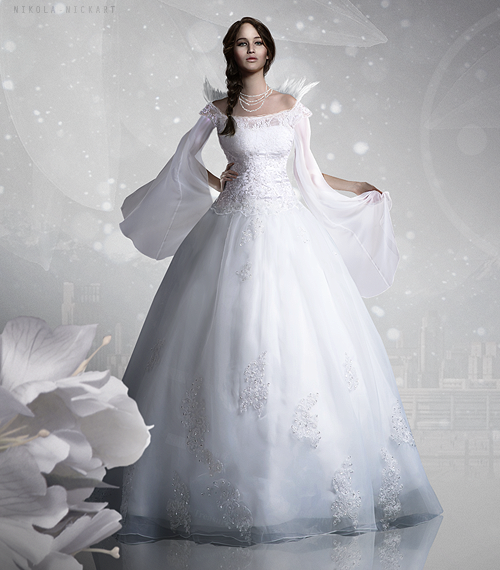