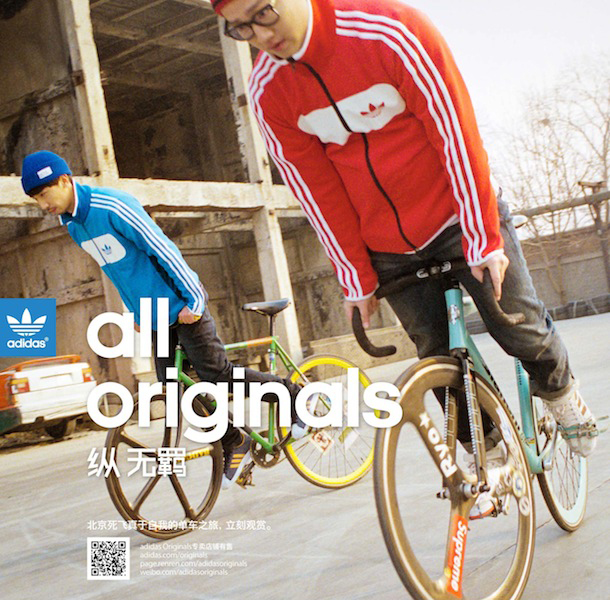 The Beijing Fixies for the China Originals campaign. Photos by Ka Xiaoxi.

The recent launch of China Originals with the creative team from NeoChaEdge has brought attention to the growing scene of fixed bike culture, and urban cycling in general. Not only is this subculture defining new lifestyle territory in the United States and Europe, but China’s got its own twist on city bike crews. Adidas with its All Originals “China Originals” campaign is tapping into this successfully and in a way that may have just outdone Converse in China (see “People’s Republic of Converse“).

In the collaboration with NeoChaEdge, adidas Originals created the China Originals campaign which includes creating original content that tells the story of key talented young people dressed from music including Li Jianhong, one of the godfathers of experimental music and sound design in China, to the fixie scene in Beijing. The content has been rolled out across Greater China in print media campaigns, viral video vignettes, in-store promos, and even taxi cab screens.

These images and video capture the latest from China Originals fixie culture segment featuring the Beijing Fixie crew including the OG of fixed bikes, Gi Ming, Wang Peng,Tang Chenshu, Liang Xing, and Xiu Zilue. The video captures the feeling of the riders, all wearing colorful adidas jackets and footwear on personalized bikes, and why they ride the streets of Beijing, plus the friendships that have been created by being a part of this scene.

Check out the video.