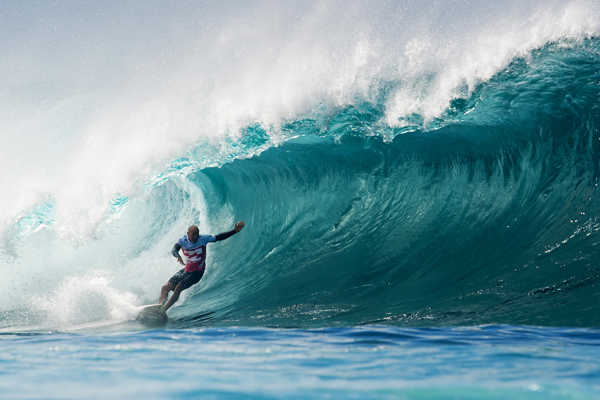 The North Shore of Oahu is currently packed with the top surfers in the world vying for the coveted win of the Billabong Pipeline Masters in Memory of Andy Irons. Billabong Pipe Masters represents the pinnacle of the 2013 Association of Surfing Professionals (ASP) World Championship Tour, deciding the ASP World Title, Vans Triple Crown of Surfing, and final slots for 2014 ASP World Championship Tour qualification.

Competition continued in six foot barrels and there was no shortage of drama in the ASP World Title race between Mick Fanning (AUS), 32, and Kelly Slater (USA), 41. There was also a shift in the Vans Triple Crown of Surfing Rankings as well as qualification developments for the 2014 WCT.

Mick Fanning, two-time ASP World Champion and current No. 1, dominated his Round 3 clash with wildcard Kaimana Jaquias (HAW), 20, but unexpectedly erred in his three-man Round 4 heat against John John Florence (HAW), 21, and Nat Young (USA), 22. A last minute paddle battle with heat leader Florence in the closing seconds of the match took Fanning from second to third and now pits him against one of the best Pipeline surfers in the world: C.J. Hobgood (USA), 34, in Round 5. Meanwhile, Slater skips Round 5 and heads straight to the Quarterfinals after his Round 4 win.

Clearly disappointed with his misstep, Fanning couldn’t leave the beach fast enough. He wasn’t prepared to talk about how this affects his approach to the final day of competition, which looks like taking place on either Friday or Saturday in the largest swell of the period.

Kelly Slater was electric in his bid for an historic 12th ASP World Title, earning the highest heat-totals of both Round 3 and 4. Slater tore past Mitch Crews (AUS), 23, with a 17.66 out of 20 heat total for incredible Pipeline and Backdoor barrels and backed up the performance with a 17.50 out of 20 in Round 4.

“I was worried this-morning about the conditions,” Slater said. “John John (Florence) and I were out trying to catch a couple of waves and I kind of thought ‘maybe we shouldn’t run, maybe we should wait and hour or two until it gets better.’ It seemed like it turned on during my heat and some kind of energy came through for me. I knew I had to make that heat, you can’t let those things escape your mind, that was the reality of the situation, but it’s not going to change how you go out there and perform. I had to go out there focused.”

Florence, took an incredible come-from-behind victory in Round 3 against an on-fire Brazilian Gabriel Medina (BRA), 19. In need of an excellent ride in the dying minutes of the heat, he drove through an unbelievable Backdoor barrel, earning a near-perfect 9.83 for the ride to advance to Round 4.

“I was nervous when I found out Gabriel (Medina) was in my heat,” Florence said. “I watched his heat yesterday and he was getting 8s on every wave and doing huge airs, so I was kind of freaked out. Days like this, you can’t be picky and I think I caught about 10 waves before I made one. I hit the bottom and was rattled until the end. That last backdoor wave was really perfect and once I came through the section it was just perfect and easy from there.”

Florence used his momentum in Round 4 for another win and now takes the lead on the Vans Triple Crown Rankings – something that seemed an impossibility when he lost first heat back at the start of the series at Haleiwa.

“Last year I had a lot of pressure on me and I feel a lot more relieved this year,” Florence said. “That heat came up against Gabe and I started feeling that pressure again, but now I’m just happy to have a little jump-start going. I’m just going to go out there and try and surf and get waves.”

Yadin Nicol (AUS), 28, claimed two heat victories today, topping fellow Western Australian Taj Burrow (AUS), 35, in a close heat in Round 3 and would earn the second perfect 10 of Billabong Pipe Masters in Round 4. Nicol took off deep on a Pipe set wave and survived a critical drop followed by a perfect tube-ride to earn the flawless score and move on to the Quarterfinals.

“When you surf Pipe with only a few people you expect to get a lot of waves and sometimes it doesn’t happen,” Nicol said. “When you see those perfect ones come in you’re half excited and half thinking ‘don’t blow it.’ I took off on that one and got a little excited and put my hands up when I came out. I was just excited to get through that heat and that was a great wave.”

“There were a couple waves out there that we didn’t make, but to be put in a position where you have to surf against a friend that you want on tour, and I want dusty on tour more than anything, it’s horrible,” Parkinson said. “I really wanted him on tour, he’s such a good talent and a good guy and a good friend. I told Dusty I wasn’t going to hassle him on any wave that I didn’t have priority for and I was even looking for waves for him when I didn’t have priority, thinking ‘maybe this one.’ I wasn’t going to just roll over though, you don’t really get many chances to win a Pipe Masters and you’ve got to have a go while you’re there.”

“I knew that was going to be a hard heat against Josh (Kerr) and knew I’d need some big scores,” Pupo said. “That was a big heat for me to get through and I was so relieved when I got that 9. I just saw that 9 coming in and made the drop and knew I just had to come out. Hopefully I can keep going and make a few more heats.”

Stay tuned for more from the Billabong Pipe Masters which holds a waiting period from December 8-20, 2013 and is webcast LIVE via www.vanstriplecrownofsurfing.com.