The dude must be seriously happy. Not only was he nominated at the Oscars for his hit single “Happy” for Best Original Song, but Pharrell Williams, from the Neptunes and producer for many, landed another gig as the face for Uniqlo UT’s latest T-shirt collaboration with his longtime friend, NIGO, formerly from the Bathing Ape who now heads-up Uniqlo UT.

The Uniqlo UT will feature Williams manifesto and site, “I am Other” in graphic statement T-s and caps for men and women. Slogans on the T-shirts range from The Same is Lame to Unlike any Other and I am Other, which taps into the disenfranchised, misunderstood, particularly among youth culture demographic who are into streetwear. The Pharrell Uniqlo UT collab will hit stores and online on April 14.

Meanwhile, the buffalo-hat-wearing multi-media artist could also be said he was sporting a move towards Adidas. Wearing the fire-red sports jacket made famous from ‘80’s b-boys from Adidas during his performance during the Oscars, it seemed likely that something was brewing with the brand.

Like NIGO, who also collabs with adidas Originals, so too now is Williams (obviously a pattern has developed). In a Youtube video release of the Williams X adidas collab, he picks up his massive Vivienne Westwood hat from a coffee table and up pops the collaboration announcement.

“Working with a brand like Adidas is such an incredible opportunity,” Pharrell said in the statement. “From the classic track suit to growing up in Virginia wearing Stan Smiths [sneakers], Adidas has been a staple in my life. Their pieces are timeless. This is an exciting partnership for both me and Bionic Yarn.”

Who is Bionic Yarn? That’s Williams’ textile company which works on issues of sustainability by recycling plastic into wearable fashion. (Williams also has collabs with Billionaire Boys Club, Reebok, Burton, and Louis Vuitton.) The fabric from his Bionic Yarn will be a part of his new Adidas collaboration and will debut this coming summer 2014.

Dirk Schonberger, global creative director for Adidas Sport Style, said, “I am truly thrilled to work with Pharrell. He is a pop culture icon that never fails to inspire, not just through his musical talent and craft, but through his many other interests. He is the perfect fit for the multifaceted company that is Adidas.” 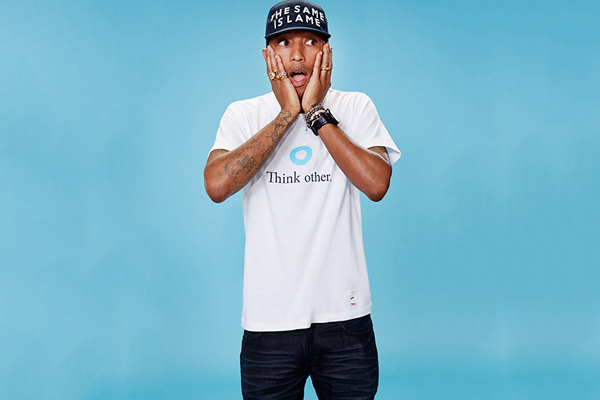