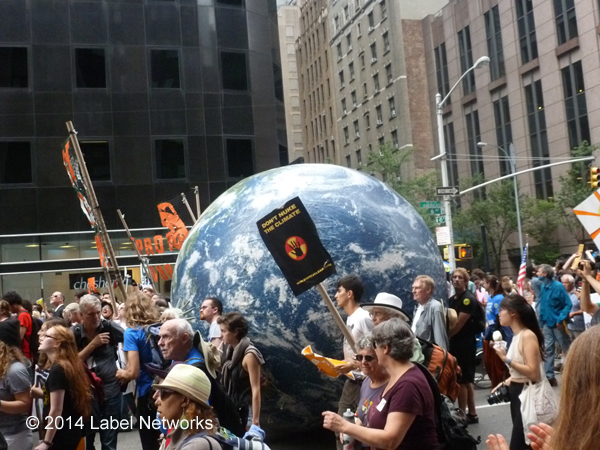 Earth getting rolled down the streets of NYC.

On Sunday, September 21, 2014, many of us at Label Networks participated in the People’s Climate March in New York City in support of bringing attention to issues surrounding  global climate change. It was an amazing experience beyond anyone’s expectations as we suddenly realized that we were in the midst of making history as part of 400,000 people gathered from around the world to promote action for the planet. It resulted in being the world’s largest climate march in history.

Originally, the People’s Climate March was scheduled for Sunday to bring attention to change that needs to take place during this week’s U.N. Climate Summit. But the march itself ended up drawing more than 100 world leaders such as United Nations secretary general Ban Ki-moon, former Vice President Al Gore, and celebrities such as Leonardo di Caprio and Mark Ruffalo who joined in the parade. In total, there were  2,808 solidarity events taking place in 166 countries. 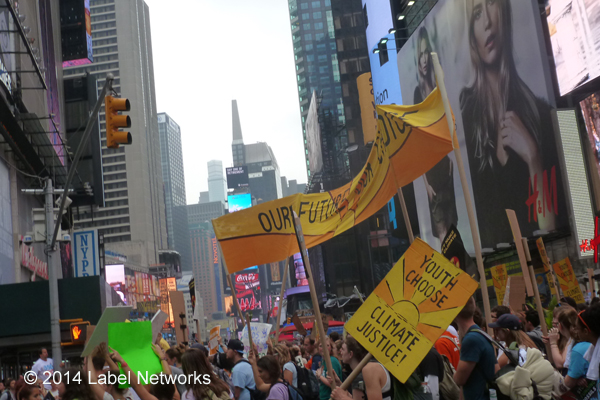 As we rounded the corner of Times Square.

Climate marchers of all ages were in attendance, dressed in costumes from polar bears to suns to windmills, carrying signs that promote renewable energy, death to fracking, and apocalyptic messages like “There is no Planet B…”

One of the most memorable moments took place in the early afternoon. We were told at 12:58 p.m. that there would be a moment of silence. Everyone became quiet and raised their hands, tilting heads down. At 1 p.m., we could hear a whistle from the front of the march as it pierced the eerie silence in the middle of New York City, setting off a human wave of cheers that roared from the front of the procession to the back, making the hair stand up on our arms. 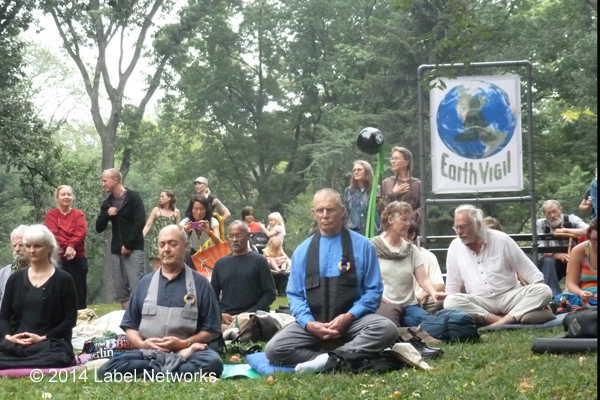 Last week some 340 investors around the globe called on government leaders to adopt carbon pricing. The EU has started this process but the United States has not. Groups were also gathered to protest investments in fossil fuel companies including many universities such as Harvard and Yale. Archbishop Desmond Tutu announced divestments of fossil fuels with hundreds of wealthy individuals and 50 different foundations, pledging to pull out of holdings in the world’s top 200 oil and gas producers. Several large corporations in 24 countries pledged to join with environmental groups to stop deforestation including Hershey’s and General Mills.

This week in NYC there are several additional protests including Flood Wall Street, and various U.N. climate negotiations—precursors to the global accord that is to be signed next year in Paris. 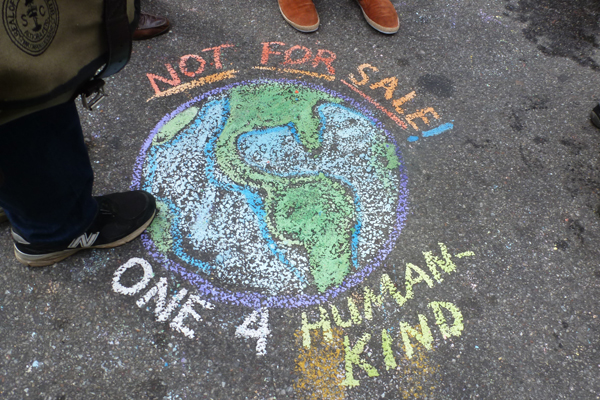 Cool chalk art along the streets of NYC.

Ironically, much of mainstream TV media failed to cover the People’s Climate March, even though we marched right in front of their NY studios. While it was clearly a global social media news highlight, only Al Jazeera actually captured live footage of the march. CNN has already taken heat for their ongoing lack of serious global climate change reportage and this past Sunday, they, among others, simply missed the largest climate action event in history. The loss of credibility for these TV networks will never be overcome, as it’s clear now that the people are looking elsewhere for their news (especially if it’s important news).

From a Label Networks and youth culture perspective, it’s clear that a new generation of young people is demanding greater change from brands, leaders, and organizations. Sustainability is at the forefront of their future concerns. As we’ve reported in our Sustainability and the State of the Future Youth Culture Studies, it’s imperative that brands and organizations understand where the future is headed in order to connect with youth lifestyles. Those that don’t will simply get left behind. Like TV network news…

Fortunately, we saw a number of brands and organizations in the march that take issues of sustainability to heart, from Patagonia to Protect Our Winters. For us, we knew that if we wanted to talk to the talk, we had to walk the walk. And we did. 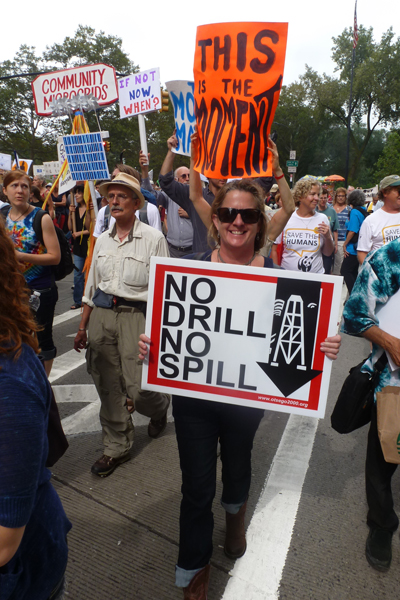 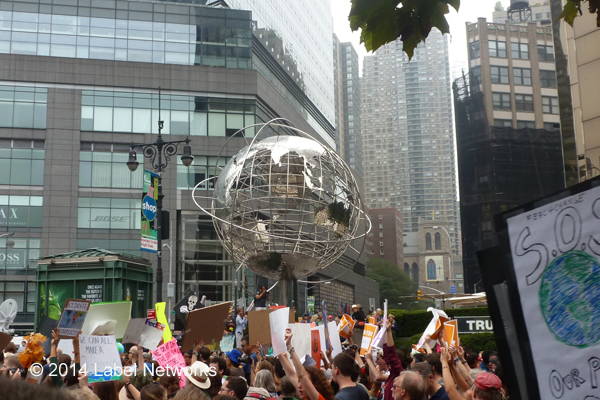 The streets of NYC featured some 400,000 marchers. 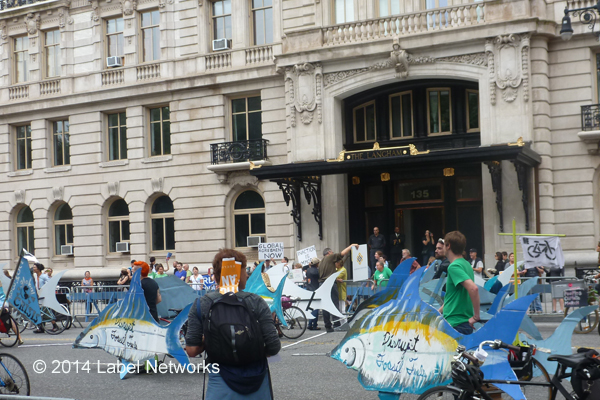 Great costumes and themes among several groups of marchers, including swimming with the sharks. 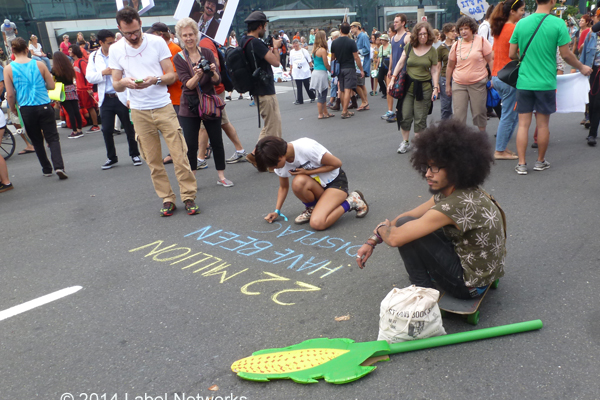 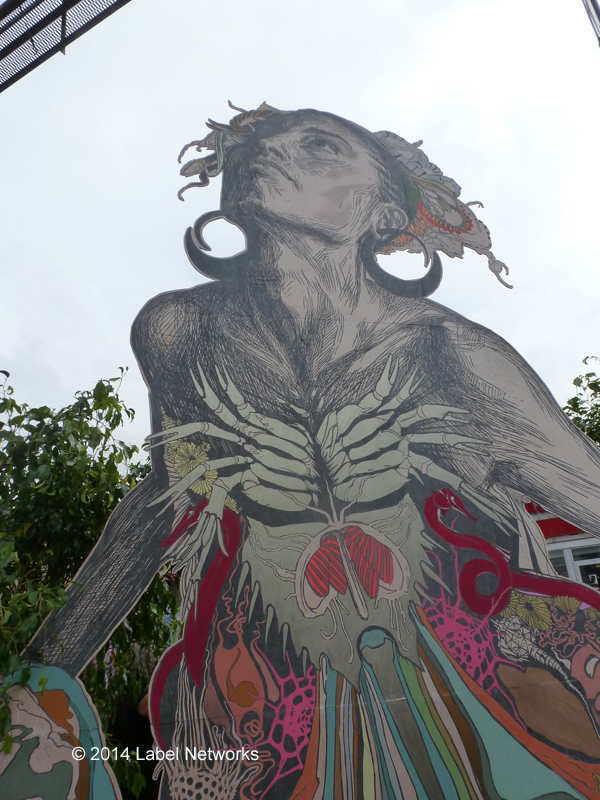 Swoon, the street artist, created an exhibition whereby people could write their thoughts about what they would miss if global climate change is not stopped on colorful ribbons. The ribbons where then displayed after being reading by fans who entered into the area. 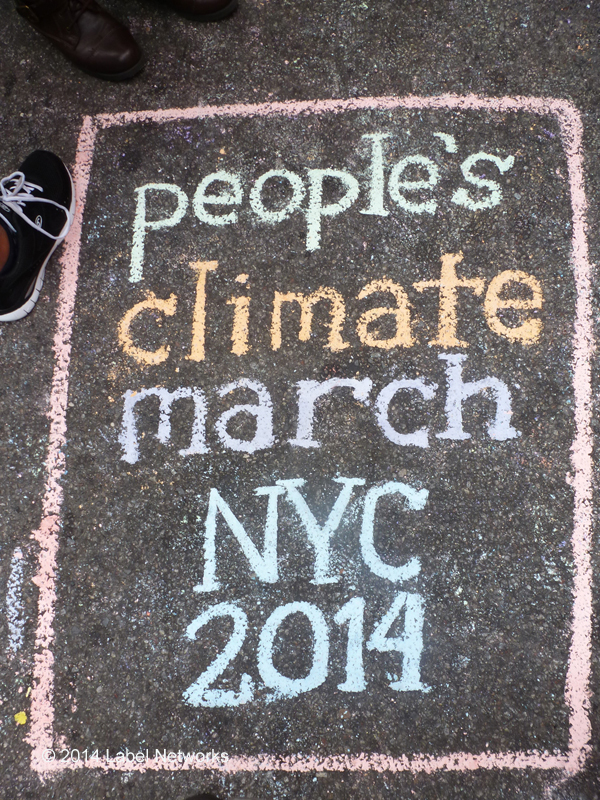 This chalk art was at our gathering location in Columbus Circle.