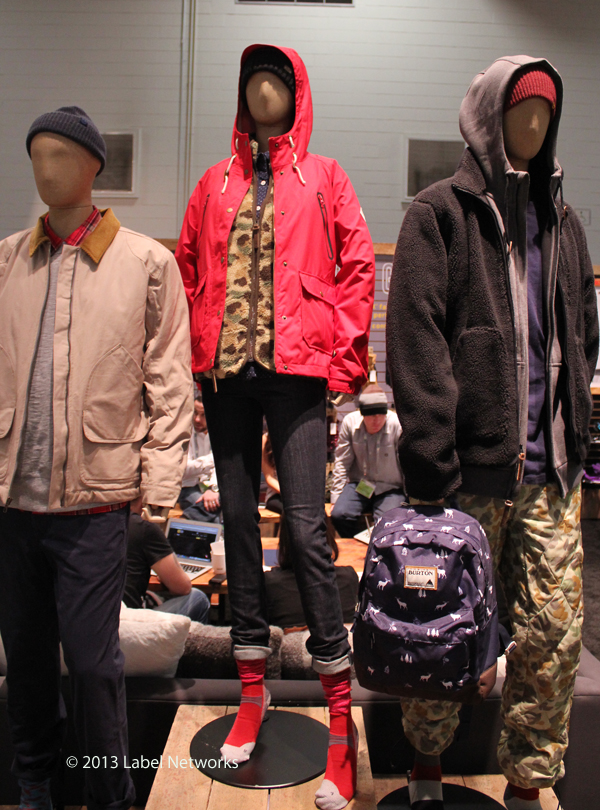 Story and Photos by Kathleen Gasperini and Tom Wallace

Outdoor Retailer Winter Market wrapped up January 25, 2013 with a strong turn-out of winter sports enthusiasts as well as fashion industry leaders looking for the next styles in seasonal jackets, snow pants, yoga apparel, and technical backpacks. While it’s by far the most conservative show we attend within the year, it is starting to take on more elements of the crossover effects mostly coming from new directions in snowboarding.

For example, split boards are of course the ongoing rage in backcountry and this is the place to showcase them, but Burton and Salomon have also demonstrated exhibits that showcase the juxtaposition of backcountry hardgear with a mix of Americana, and electro-pop outerwear. From Burton to The North Face, jackets in bright pinks, reds, oranges harken back to an early 80’s era. Mixed in however, are streetwear influences of camo snowboarding pants, paired with flannel checked layer pieces, as seen from the heritage side of Dickies.

The big news at the Salt Lake City show however was that Outdoor Retailer (OR) has come to terms with the city and will be hosting the show at the Salt Lake Palace through 2016. This is a sigh of relief to many in the industry that feared it may end up in a place like Denver, similar to its competing show hosted right after OR, Snow Industries of America (SIA) which features skiing and snowboarding predominately.

Of course many wish the two shows would just merge. Talk on the floor among some of the major exhibitors stemmed from the ongoing frustration of having to go to both back-to-back. Of course, compared with shows such as Agenda, even Project, OR and SIA come from an old-school aesthetic that the bigger the booth the better. In today’s economic climate, such largess borders on pretentious.

But OR overall included an 8% increase with some 177 new exhibitors (950 total), including an entirely new area for an expanding yoga section, and brands such as Fox Racing and Neff. Lifestyle exhibitors in general show where the growth is coming from and a marked change to the industry including the crossover brands like Neff, as well as Puma and their street-inspired winter boots/sneakers, Reebok and their winter footwear and layer pieces, Holden, and a variety of 70’s-inspired tie-dyed yoga apparel brands.

Unfortunately, OR’s attempt at engaging in more of the lifestyle aspects of the outdoors fell flat with their runway show. Lack of proper lighting, models unfamiliar with staying still long enough for media to capture images, and the styling combinations did little to enhance that OR is on track with fashion. One was better off simply walking the show and seeing what exhibitors displayed instead.

Label Networks was honored to present at OR’s presentation series on the state of Sustainability and Youth Culture, which was successful by all accounts. Unfortunately, there remains a disconnect between many of the brands silo-ed in the industry of OR and the impacts of a new youth culture. We have reported on this in terms of the changing dynamics of the marketplace for years within our presentations and Global Youth Culture Studies.

The most obvious disconnect comes with the make-up of the show itself which is a vast majority of one ethnic group, and lacking in the cultural diversity of the landscape of youth culture today. As we pointed out in our presentation, 22 of the top 100 metropolitan areas in the United States are majority-minority. By 2040, the population of the United States overall will be majority-minority.

Those working on bringing the outdoor industry out of the Dark Ages could be seen with brands like Burton, of course, but also The North Face, and REI who have collaborated on a project called Expedition Denali—Inspiring Diversity in the Outdoors. The goal of the program is to have a group of ethnically diverse beginner mountaineers go through various training via NOLS, and in June, summit Denali in Alaska. The training so far has been documented and the promotion from both brands have increased awareness to the fact of the lack of diversity in the outdoor industry.

With the show still going relatively well, despite a lighter-than usual second snow year, it’s not going to be the hardgoods that generate significant growth in the outdoors, but the development of connecting via the lifestyle of what the outdoors can be for a wider range of people than are currently represented.