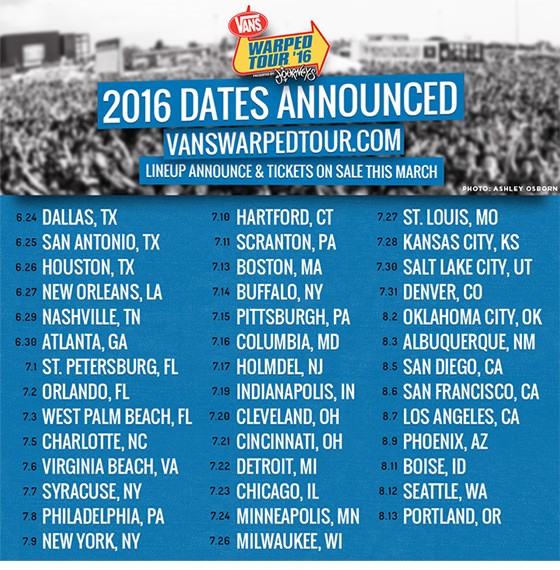 The longest-running music tour, the Vans Warped Tour, has announced their tour dates for 2016. This tour has become known as the rite-of-passage among youth culture in America today, and it clearly shows no signs of stopping.

Two weeks ago at the FESTForward Conference in Santa Barbara, CA, the Warped Tour won for Best Sustainability Strategy for a Music Tour or Festival, based on it’s hard-earned eco criteria, established years ago by Kevin Lyman, the producer and founder of the Tour. Kathleen Gasperini from Label Networks, the market research company for the Tour for the past 16 years, helped to create the Warped Tour Zero Waste Sustainability Strategy , making it one of the largest sustainability programs of any music tour in the country.

On Monday, Warped Tour released their Tour dates for the summer of 2016, starting in Dallas, TX, on June 24, and running until August 13, ending in Portland, OR, for a total of 42 dates.

In addition, the Tour will be going to Syracuse, NY, for the first time, and returning to New Orleans and Boise this summer. Band line-up will begin in March, 2016.