Winter of 2016 marks the 20th Anniversary for Boarding for Breast Cancer (B4BC), and the season is shaping-up with a variety of unique celebration events. To start, is the first stop of a photo and art exhibition, called “20 Most Iconic Snowboarding Image of All Time,” and a commemorative exhibition tracing the herstory of B4BC since 1996, curated for B4BC by NEMO Design.

The X Games Aspen 2016 will be the first stop of this 3-stop photo exhibition tour throughout 2016, with their kick-off evening bash in the exclusive X Games Athlete Lounge at Buttermilk Mountain on January 27, 2016. The evening will benefit two causes – The V Foundation for Cancer Research and Boarding for Breast Cancer (B4BC).

Guests will be able to enjoy a cocktail reception in the X Games Athlete Lounge, opened to the public for the first time ever, and will also have a unique opportunity to mix and mingle with X Games athletes, indulge in hosted appetizers, listen to a live performance by HONEYHONEY, and partake in a one-of-a-kind silent auction featuring the exhibition, “The 20 Most Influential Snowboarding Images of All Time.” 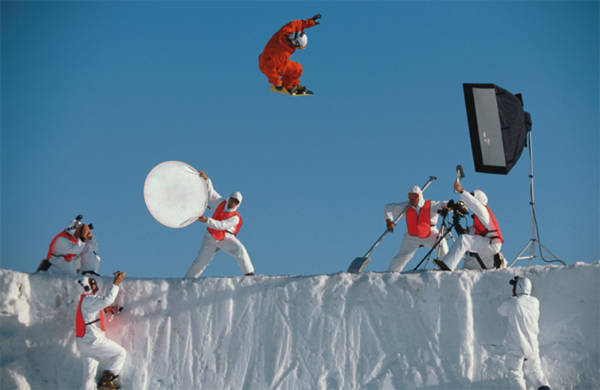 Classic Trevor Graves image, part of the 20 Most Iconic Snowboarding Photos of All Time exhibition to kick-off at the X Games, January 27, 2016.

“I’m incredibly stoked that the X Games thought our photo and art exhibition was a good idea, and wanted to host this event and make us a co-beneficiary of their opening night party,” says B4BC co-founder and Executive Director, Kathleen Gasperini (Kathleen is also the co-founder and Senior Vice President of Label Networks).

“I spoke with my good friend Trevor Graves, founder of NEMO Design to see if he could help us with this fundraiser and it’s turned into an exciting exhibition. His idea of curating the 20 most iconic snowboarding images of all time really will put this exhibition on the map.”

Stay tuned for more from B4BC’s 20th Anniversary plans, which will include the return of the B4BC Snowboard + Music Festival, at Sierra-at-Tahoe on April 2-3, 2016, and much more.

The X Games opening night benefit is offering a limited number of tickets for this unique experience at $150 per person.

ADMISSION INCLUDES:
• Entrance to the X Games Aspen Kick-Off Benefit
• One raffle ticket for a chance to win X Games Aspen VIP Platinum passes, a Marhar snowboard and other prizes
• Live Music performance by HONEYHONEY
• Hosted appetizers and cocktails provided by McKenney’s at the Inn at Aspen
• Opportunity to meet, mingle, get autographs and photos with X Games athletes
• One gift bag – premium items including a commemorative 5-by-7 print from the iconic photo exhibition, memorabilia from Marhar Snowboards, B4BC and others
• A commemorative credential for the evening bash

SILENT AUCTION: The silent auction will feature the “The 20 Most Influential Snowboarding Images of All Time” curated for B4BC by NEMO Design.