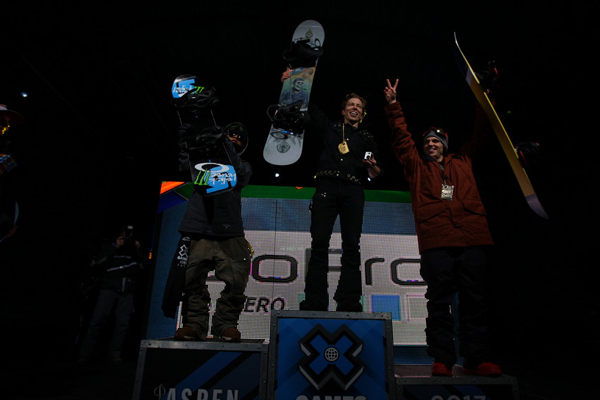 X Games Aspen 2013 made history with the largest 4-day crowd attendance ever with 115,000 people including a record-breaking 47,200 on Saturday alone at Buttermilk Mountain in Aspen, CO, January 26, 2013. While the X Games continues to be known as the “alternative Olympics” it also has some interesting snow sports in its competition line-up including Skier Slopestyle, Snowboarding Big Air, a host of Snowmobiling events, and the most popular of events, the Snowboarding SuperPipe.

“Six years, that’s a long run in Aspen,” he said. “It’s very familiar to come and here and compete.  I go to my favorite restaurants, say hi to the same parking attendants, it feels like home.”

There was a noted absence, however, as Iouri Podladtchikov – aka “I-Pod” – had to pull out of the contest due to an illness.   “My main competitor got incredibly sick last night and couldn’t compete, so that was disappointing,” said White.

“I like when everyone’s here, but I put down my run and I’m really proud of it. That front double 1260 gave me a hard time and I pulled it out perfect.”

The silver went to 14-year-old rookie Ayumu Hirano of Murakami, Japan. This is the future of the sport, and someone to note as he broke onto the scene just as a young Shaun White did a decade previous. The young gun gave White a run for his money with incredible amplitude and impressive hits, including an 18-foot backside method to a frontside 1080 to cab 1080, followed by a frontside 900 to a backside 900 and ending on a frontside double cork 1080. Hirano’s amplitude never dipped below 15-feet out of the 22-foot SuperPipe.

“I wanted to go big and land my run,” he said via his Japanese-English translator. “I’m thankful for everyone who cheered for me.”

What’s also unique about this year’s X Games in Aspen is that the event made its debut as a part of the 2013 World Snowboard Tour as 6Star Halfpipe and Slopestyle events.  Both Aspen and Tignes are an official part of the series, counting toward the overall TTR World Championship for 2013.

In the women’s SuperPipe Finals, herstory was made once again with Kelly Clark 3-peating her gold medal win. In what was a close–and well attended with over 47,000 people–battle for gold, veteran Kelly Clark, 29, of Mammoth Lakes, Calif., managed to gain a slight lead over silver medalist Elena Hight in her third and final run.

Hight was leading for the majority of the competition after she landed the first-ever – by any male or female – backside ally-oop double rodeo 900.

“I was pretty blown away that I landed that,” said Hight.

Clark edged Hight out with huge amplitude, boosting 14-feet out the SuperPipe, and technical back-to-back tricks, including a frontside 1080 to a cab 720 to a frontside 900.

“All the women rode great tonight, I’m so proud of Elena, it was a great night for women’s snowboarding,” said Kelly “This was the most difficult run I’ve ever done in terms of amplitude and technical tricks, in that perspective I’m extremely proud to be on top of this sport that’s progressing at a rapid pace.”

Bronze went to X Games rookie, Arielle Gold, 16, of Breckenridge, Colo. who was granted a place in the final only three days prior when veteran Gretchen Bleiler pulled herself out of the competition. Gold’s best-scoring run included a frontside 900, backside 540 to frontside 540 and a frontside 720 to a cab 900.

“I’m still in shock, I’m so unbelievably excited,” she said, “This could’ve been anyone’s contest.”