Guerilla24, a unique new denim brand from Hong Kong featuring selvedge jeans, is taking an interesting marketing route of utilizing street art as the backdrop to the appropriately named Guerilla24. Debuting earlier this month in the downtown street art gallery Crewest, the brand collaborated also with Bullet Magazine for its opening show, attracting LA fashionistas and media to the vibrant scene.

Guerilla24 founder Daniel Cheong explained that he comes from a denim industry family, and is resurrecting his heritage with his new brand of handmade, raw selvedge jeans from Japan. Guerilla comes from his original idea to sell his jeans using the foodie truck concept and taking his collection from city to city via vehicle. However it made more sense to actually sell his collection online, but the name Guerilla and the grassroots, street art theme remained.

At $250 a pop on average, these are the types of jeans for the denim connoisseur. But each style is unique and limited, from sanded styles, to slim silhouettes with a drop crotch, to various washes used in the finishing touches.

Inspired by recent trends in Americana, True Religion’s Fall collection is all about the roots of the West, complete with a video featuring a male model wrapped in an American flag, riding a motorcycle with an equally good-looking woman in a denim vest and jeans. According to Jef Lubell, the CEO of True Religion, “The spirit of America and its unique style served as inspiration to create a collection filled with authenticity and individualism that embodies the integrity of American design.”

Their video campaign is pretty inspiring and provides more insight into what to expect from the brand this Fall.

Finally, Bread & Butter has released their latest round of video vignettes from their latest show earlier this month. One of the most intriguing from “The Rock” is the director’s cut of the Denim Religion runway show, combining art, fashion, and creativity to the event. Check it out here.

Bread & Butter has also released their new theme for their next show in Berlin, January 15-17, 2013, called Big Time to be held at the Airport Berline-Tempelhof. 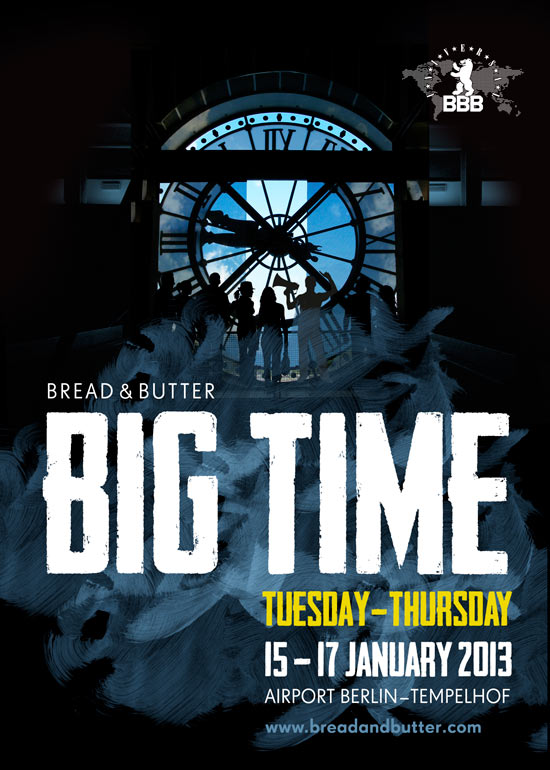