Bread & Butter Made It Official, They Are Over After 14 Years Katy Perry to Be the Featured Holiday Girl for H&M, Replacing Lady Gaga and Tony Bennett 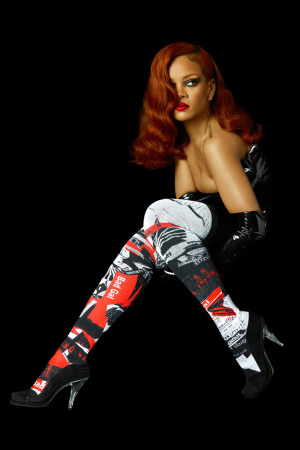 Rhianna has been brought on board the booming sock company Stance in a 3-year deal as a contributing creative director. Yesterday, the company launched two of Rhianna’s designs on their site, with the full Rhianna/Stance collection coming out this Fall which will include 18 styles including a thigh-high style—a first for Stance and probably a trendsetting item in the future.

The two designs on the site however are limited-edition designs numbered up to 1,500 and going for $30 a pair. There are also 1,000 over-the-knee Rhianna sock styles, similar to the ones she wore for the Complex magazine photo shoot, going for $26 a pair.
Her signature style includes the stamp “Bad Girl” like her Instagram account and comes in a newsprint typography with red, white, and black colors.

According to an interview with WWD, Rhianna said, “I’ve had a great relationship with Stance for a long time [since 2012] and ‎I am happy to be working with them on such a fun and creative project.”

According to Candy Harris, senior vice president of Stance’s women’s division, “She creatively pushes the boundaries in everything she does. It’s nice to work with out-of-the box ideas for our brand.”

“There are very few women in fashion whose personal style can go from street to couture in a blink,” Harris said. “She does it with such credibility and authenticity. It makes her an original.”

Rhianna also is a creative director and a brand ambassador for Puma.