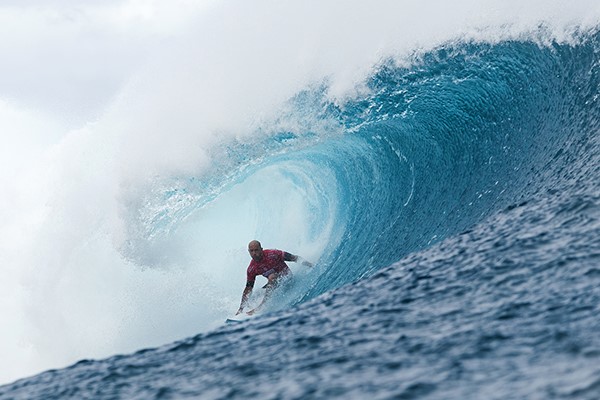 Big wave surf season is just starting and as we move into the fall and winter months, the waves tend to just get bigger and the competitions more insane.

On Sunday, August 15, 2015, in Teahupo’o, Tahiti, at the Billabong Pro Tahiti, Stop No. 7 on the Samsung Galaxy World Surf League (WSL) Championship Tour (CT), in six-to-eight foot surf Kelly Slater scored the top score so far. This is Round 2. Teahupo’o is often covered because it’s often one of the biggest and heaviest waves that professional surfers will encounter while in competition.

The Billabong Pro Tahiti runs from Friday, August 14 to Tuesday, August 25, 2015 and is webcast LIVE at WorldSurfLeauge.com and via the WSL mobile app. Stay tuned for more because this will be epic. 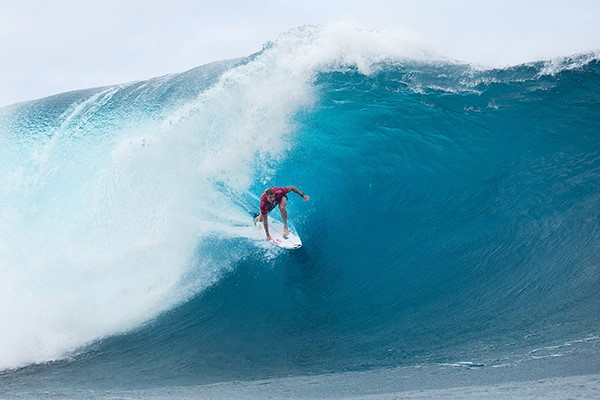 Mick Fanning (AUS) looked calm and poised as he sailed through his Round 1 heat today at the Billabong Pro Tahiti. Photo by WSL / Kelly Cestari.

Last Sunday, August 2, 2015, in Huntington Beach, CA, the Vans US Open represented some significant “firsts” for the winners. First, Johanne Defay (FRA) and Hiroto Ohhara (JPN) reigned supreme on the final day in front of a capacity crowd. Defay has been crowned champion of the Women’s event, stop No. 6 on the Samsung Galaxy World Surf League (WSL) Championship Tour (CT), while Ohhara has won the Men’s Qualifying Series (QS) 10,000 event—the first Japanese surfer to make it into the finals.

Johanne Defay’s first elite CT victory meant taking out Sally Fitzgibbons (AUS) in a tense Final at he Huntington Beach Pier. The win sees her earn 10,000 points and move up five places to sixth on the Jeep Leaderboard.

The Reunion Island surfer took an early opportunity in the Final and earned a heat-high 7.67 for a series of backhand snaps to take the lead and put the pressure on Fitzgibbons, who was left looking for a 5.52. Fitzgibbons found a comeback wave with five minutes remaining, showcasing a reverse followed by two more turns. She was rewarded with a 7.00 and the lead but Defay answered with two big turns for 5.87 and reclaimed the top spot to take the win. 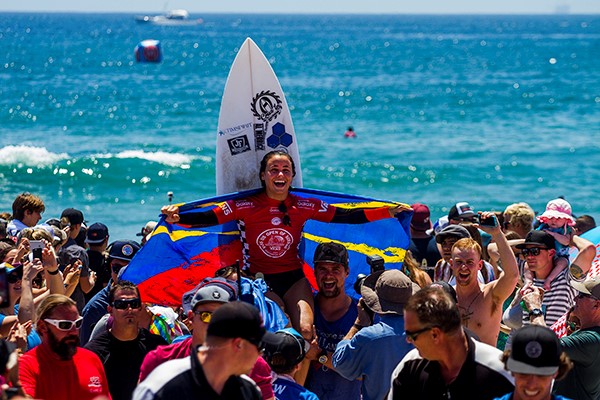 “I don’t think I can put it into words,” said Defay. “It’s very hard to digest and I don’t know how to say how I feel — it’s so crazy. I’m very happy to have some of my friends here and I’m thinking of the people back home too. I guess it’s all the work I’ve done before and it’s all come together. I’ve just been sticking to same game plan, trying to get a lot of waves. It was tricky at the start but then I got that score which put me in a better position. I feel really good, last year everything was so new and this year I feel way more comfortable.”

Defay previously defeated good friend Bianca Buitendag (ZAF) in the Semifinals in a rematch of the Fiji Pro. Neck-and-neck throughout the heat, Defay won with the narrowest of margins, 0.01, to earn her first ever CT Final appearance. 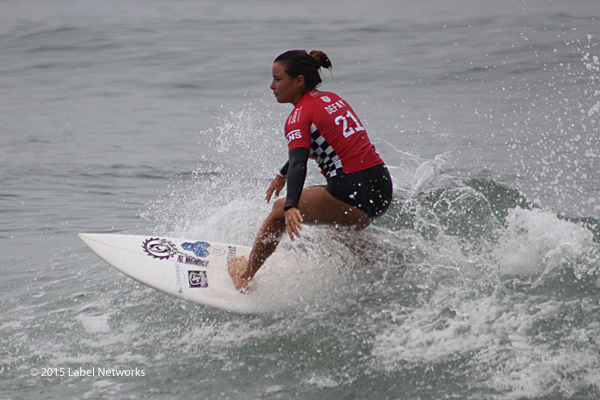 Defay in the first round of the day in the morning surf fog/gloom. Photo by Label Networks/Kathleen Gasperini.

“It’s pretty amazing, I could never imagine that I could win here or that I could win an event,” continued Defay. “I just took it heat by heat and it’s so crazy. This is definitely my biggest win. Ending up last year at eighth on the rankings I thought maybe I could do top five so we’ll see what happens this year.”

Fitzgibbons, the 2011 event winner, earned herself a runner-up finish and remains at third place on the Jeep Leaderboard. Searching for her 10th CT win, the Australian previously dispatched the new Jeep ratings leader Courtney Conlogue (USA) in the Semifinals. Fitzgibbons posted four scores before Conlogue could find her first wave and kept the advantage throughout the match-up. A no-grab reverse from Fitzgibbons earned her a 6.33 to increase the lead with 5 minutes remaining. Both surfers took a wave in the final seconds but Conlogue’s fell short of the 6.60 required and she takes home a third-place finish. 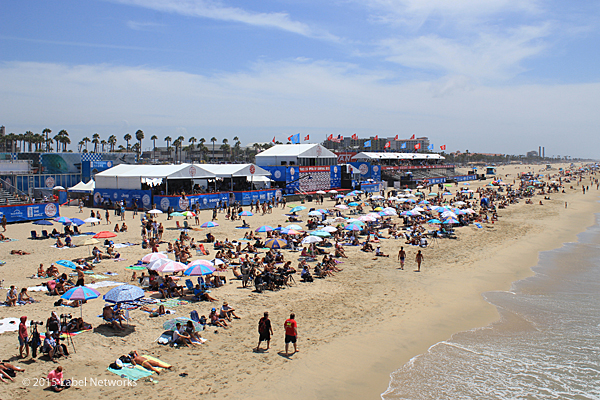 Scene from the US Open of Surfing 2015. Photos by Label Networks.

“I just try to make the most out of every opportunity that comes my way,” said Fitzgibbons. “I had to really slow things down before this competition and I’ve been focused on keeping things calm and enjoying it down here. It’s going to take me some time to adjust to not wearing this helmet once I’m all healed!”

“I’m just so blessed to be here and to be able to compete in this event,” continued Fitzgibbons. “The crowds and the atmosphere they create is so awesome and there’s so much support across the whole beach and along the pier. I’m really happy to make the Final and it’s great to see Johanne (Defay) take the win. Thank you for a great event everyone.” 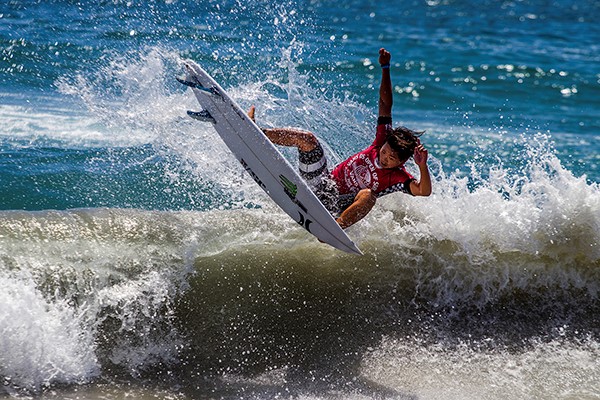 Hiroto Ohhara (JPN) claimed the biggest result of his career today winning the Vans US Open of Surfing Men’s QS 10,000 after defeating Tanner Hendrickson (HAW) in a hard-fought Final. The result propelled Ohhara up 68 places on the QS rankings to 13th place, putting him within reach of qualifying for the Top 34 in 2016.

The pair traded waves throughout the exciting bout with the young surfer from Japan holding the lead through the opening half. A strong backside vertical snap from Hendrickson earned a 7.00 and a back-up 5.90 saw him take the lead. Three big turns on the outside from Ohhara followed by a final maneuver on the inside with just over three minutes remaining earned him an excellent 9.17 and a lead change. Hendrickson was left looking for a 7.51 but his final attempts fell short and Ohhara took the historic win.

“I don’t know how to say it, I’m just so stoked,” said Ohhara. “It feels like something very special today. Now I think I’m really looking forward to the rest of the year. I’ve learnt everything here and I got a good result here.” 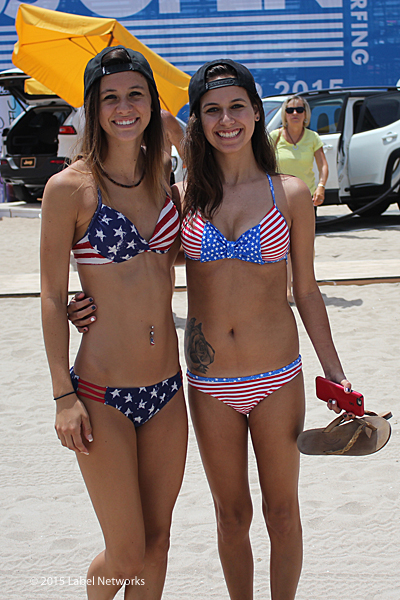 Vans US Open of Surfing is a festival experience, attracting thousands of people throughout the week that come to check-out more than surf, including skateboarding and BMX competitions for guys and girls, sponsor activations, live street art, and an area known as the Van Doren Village featuring Steve Van Doren of Vans fame, free hotdogs and hamburgers, loads of games, and a giant shoe for selfies.

Ohhara became the first Japanese surfer to make the Final at the Vans US Open of Surfing after defeating local favorite Kanoa Igarashi (USA) in the opening Semifinal. Taking eight waves to Igarashi’s three, Ohhara edged the win and sent the Huntington Beach local home in third place.

“It feels so amazing right now,” continued Ohhara. “I’m super stoked to win this event. I just want to thank everyone — my sponsors, family and friends. This means that the Japanese are no. 1! I really want to be on the CT now so I’ll just keep focused and concentrate on the next event.”

Runner-up Hendrickson moves up to 14th place on the QS rankings and caused the ultimate upset in the Semifinal, ousting defending event winner and CT standout Filipe Toledo (BRA). A heat high 7.17 from Hendrickson for wrapping cutback followed by a frontside air put him back in contention after Toledo took an early lead. The unsponsored underdog was left chasing a 5.03 to eclipse the Brazilian phenom. With eight minutes remaining Hendrickson delivered a series of powerful snaps, netting a 6.07 to force a lead change and leave Toledo in need of a 7.08. The clocked ticked down with the Brazilian hunting the lineup. With just under two minutes left Toledo took a wave but fell on his final maneuver and didn’t get the score, leaving the competition in third place. 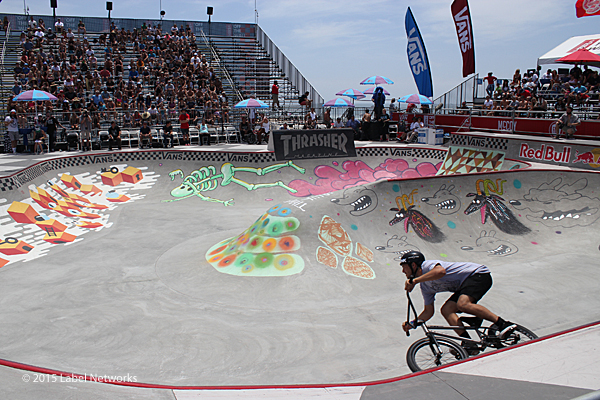 BMX and Skate bowl were so packed for the finals that there was a line forming to gt into the stadium. Photo by Label Networks/Kathleen Gasperini.

“I feel incredible but I still don’t think it’s soaked in yet,” said Hendrickson. “I just want to thank everyone for their support and making me feel on top of the world. Beating that kid (Toledo) was probably the highlight of my life. I gave it my all in the Final so it’s all good.”

Stay tuned for more surf highlights over the next few months. 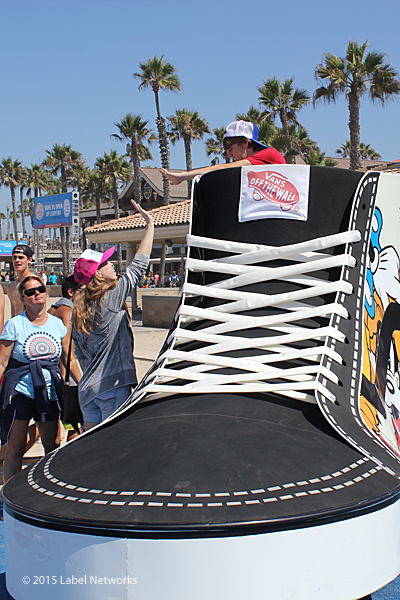 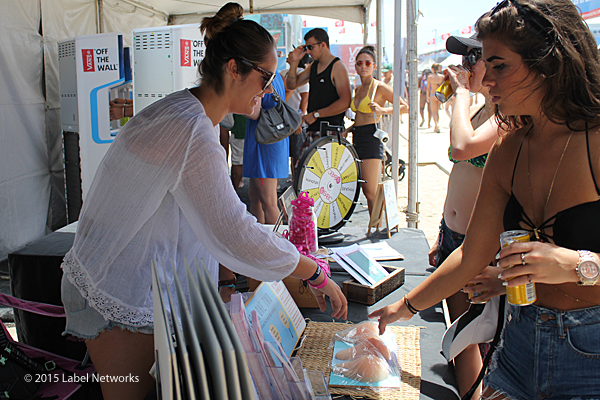 Boarding for Breast Cancer (B4BC) was once again on-site at the Vans US Open of Surfing spreading prevention education, awareness, and positive vibes to the thousands of fans who attended the event. Many of the top female surfers and skaters that were competing at this event support B4BC. Photo by Label Networks/Kathleen Gasperini.