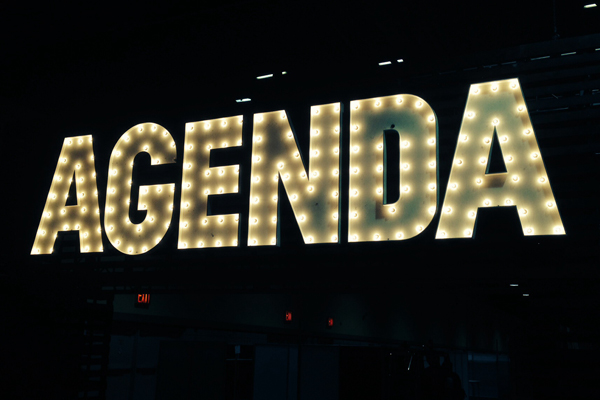 Agenda Long Beach kicks-off the next round of fashion trade show season.

Agenda trade show, the leaders in streetwear and action sports inspired apparel, footwear, and accessories, kicked-off the next season of fashion trade shows in Long Beach, CA, July 10-11, 2014 with a bustling scene and new trend directions. First, the crossover between technology and fashion is clearly influential in streetwear with more designer headphone brands, camera brands, wearable technology and showcases. Other notable growth patterns where the number of accessories—particularly socks from brands like Stance—which are in greater numbers than ever before.

Communication is key to a new generation of consumers and some of the leading brands in the space were represented as well as fashion labels who have stepped-up their game and incorporated aspects of technology, in particular branded music listening devices, and POV cameras (Leica Craft also exhibited, for example). 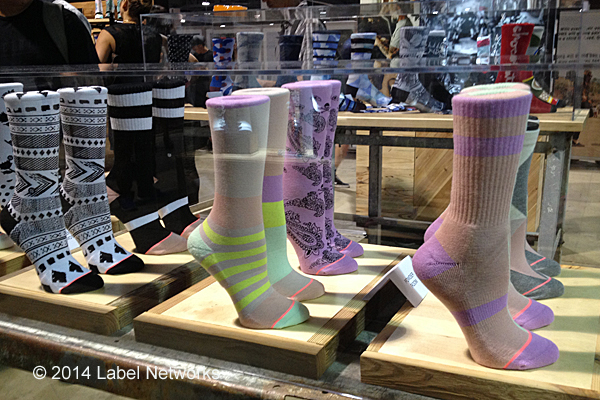 Socks are a key accessory lead by Stance.

Backpacks and bags are as essential to the wardrobe of this scene as are the actually apparel items and more were on hand than ever before. The twist however is the growing number of brands with a mission, whether they be sustainability such as Rareform which refashions billboards into colorful totes, duffles, laptop sleeves, and bags, or Be Packs which donates $10 for every bag purchased to a child’s education in Zambia.

As we’ve illustrated in our Sustainability and the State of the Future Youth Culture Studies, brands that want to connect with today’s savvy youth culture marketplace has to incorporate elements of eco-friendly, fair trade, or sustainable strategies into the mix. 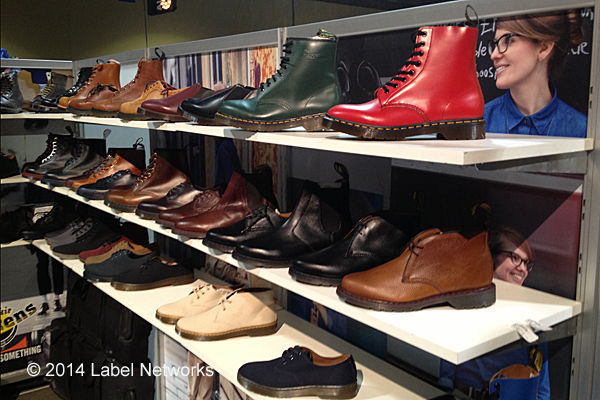 Dr. Marten’s are a staple of streetwear and music-inspired fashion.

Footwear brands like TOM’s shoes is the obvious example and does well in this space, but The People’s Movement is gaining moment for their take on sustainable footwear, which is all raising the bar for older street and action sports brands to get on board (no pun intended).

Skateboarding ruled the show, as usual, including an on-site skate contest with a $10,000 purse and sponsored by Transworld Skateboarding, DGK, and Red  Bull Skateboarding. The contest lends itself to the exhibitors and those who attend, particular the skaters and skate shops and core buyers who come to Agenda for the sole purpose of heading to The Berrics and getting the latest boards, gear, and apparel. It is at this show, for example, where Adidas Skateboarding makes an appearance, and brands like Nike SB may very well be exhibiting in a smaller, discrete, non-threatening booth right next to Plan B or Billionaire Boys club. 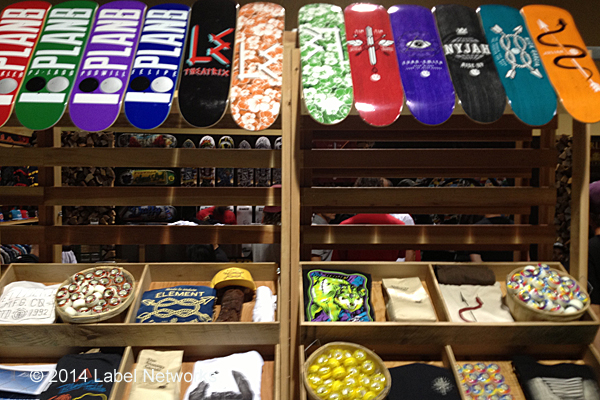 Plan B and Nyjah’s boards and accessories in The Berrics.

Also noticeable is the integration of motocross into the apparel side of street with staple brands like Famous Stars and Straps on site, and moto-inspired fashion from the likes of Puma and others. Moto-inspired fashion is moving to the forefront of couture as seen in the eclectic show from Fergus “Fergadelic” Purcell in his collaboration for Fall/Winter 2014 with Marc by Marc Jacobs.

Agenda always has a new way of reaching people and this time around it was the launch of their own Pandora radio channel. So while some people in street and action sports couldn’t be on site, they could listen in to the Agenda radio show which took place live. 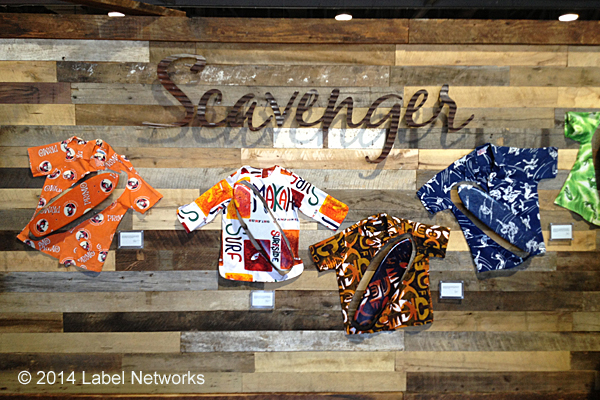 Mix of surf and skate styles are a part of the make-up of Agenda. Bright patterns are still trending.

Agenda also introduced this time around a “Best In Show” awards to recognize brands with great designs on-site. This helped to step-up not only booth displays and presentations, but gave cred to brands that clearly are on top of their game.

Other areas to note were The Woods which is like a mini-show within Agenda dedicated to heritage brands, retro styles with modern twists, premium materials, and an outdoorsy, woodsman feel. The bearded guys are located here and often wearing high-end denim. Similar to new areas at Capsule and even Liberty Fairs, The Woods brings the urban outdoors into streetwear and action sports, which is a growing lifestyle category especially for must-have accessories, including survival kits, jackknifes, backpacks, and camping gear. 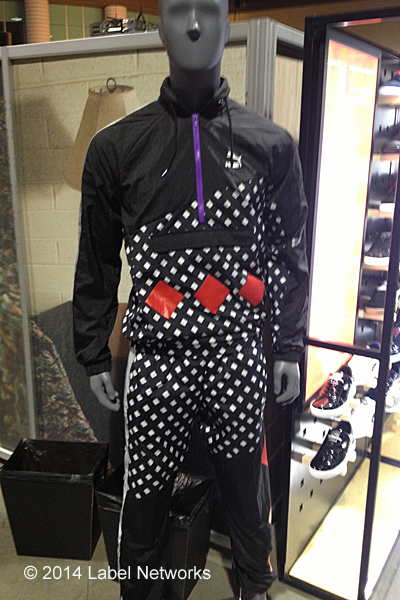 Streetwear is also getting more attention thanks to areas such as Agenda WMNs which brings together the women’s side of action sports and streetwear. From brands like Minimale Animale, HLZBLZ, StyleStalker, and SuperMuse, and the much talked-about debut of Amuse Society, the area covers women’s from beach-themed apparel and accessories, to Goth and punk, to delicate nouveau hippy, and even fashionable football-inspired-wear.

10 Deep, Crooks and Castles, Native, and In4mation are among the staples of show that provide core streetwear aesthetics.
Interestingly, many are keeping with the bright colors and showy patterns bordering on Hawaiian, but some in street have integrated hoodie culture with tie-dye—which once again brings out a modern twist to a retro era. 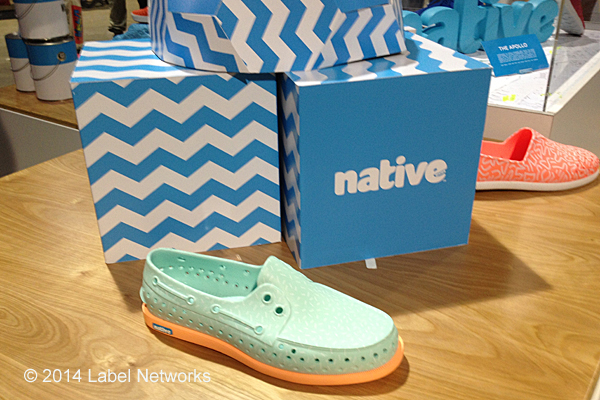 Native for summer has a Crocs look.

Of course, Agenda also showcases the greatest mix of beach culture brands including surf and surf-inspired accessories, boards, and swimsuits. It’s not quite Surf Expo in terms of all-surf, but there’s clearly an appropriately strong California surf vibe at Agenda Long Beach which gives the show a healthy blast of nature and sportswear, mixed in side-by-side with street. So far, it’s the only fashion trade show that can pull this off.

Stay tuned for more brands and coverage from the upcoming show in New York City next week. 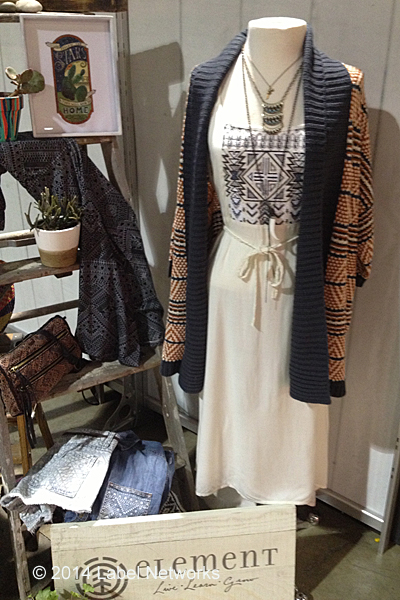 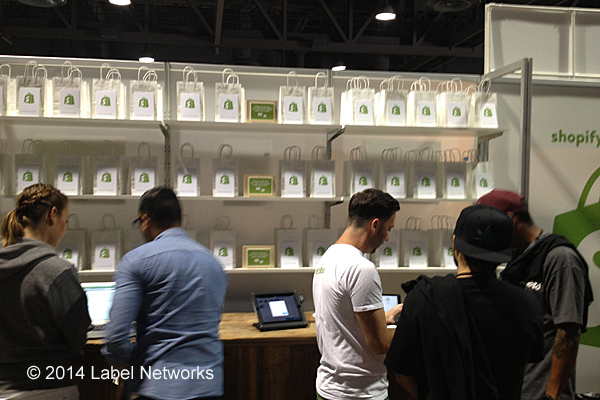 Shopify was on site and getting heavy traffic. 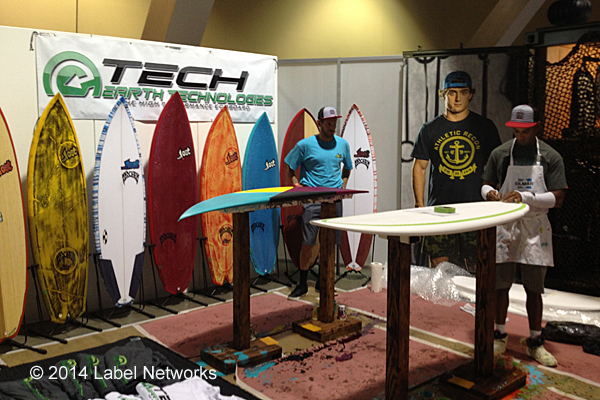 Surfboard manufacturers and shapers are a part of the Agenda Long Beach scene. 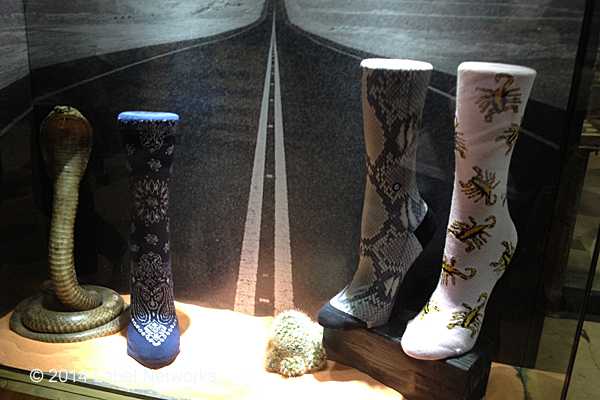 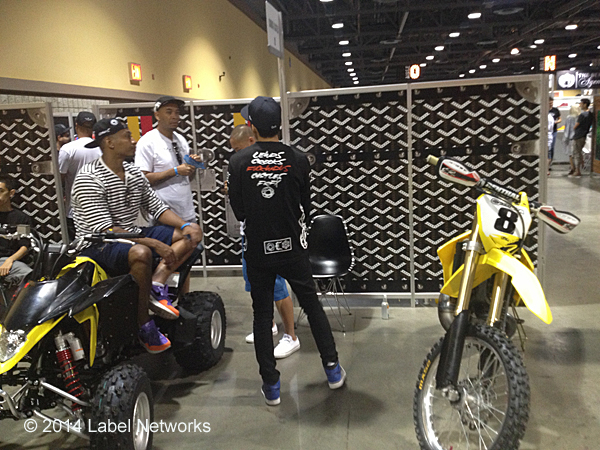 Motocross and moto-inspired fashion is on the rise once again. 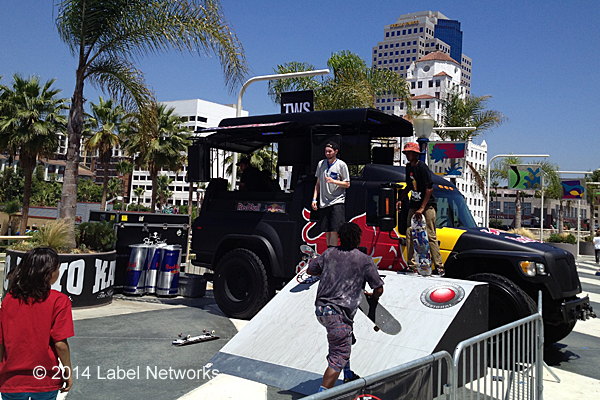 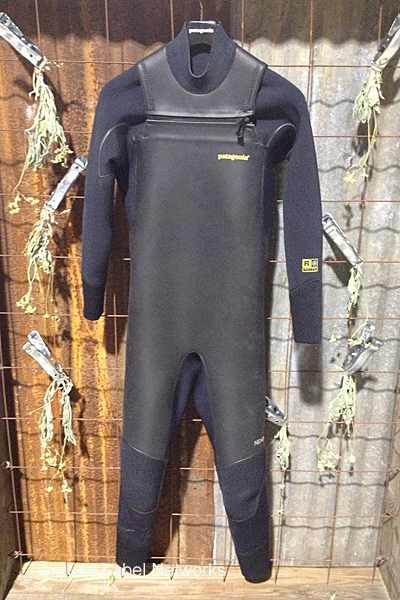 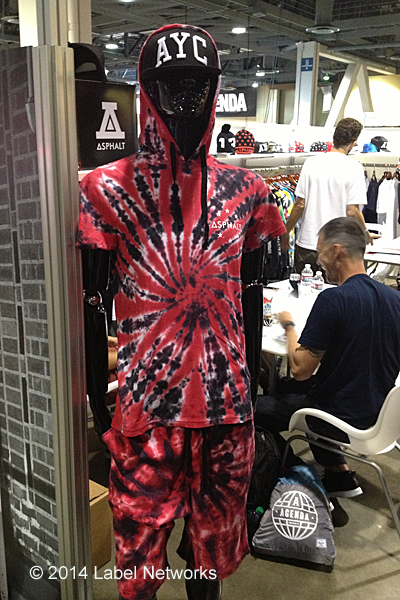 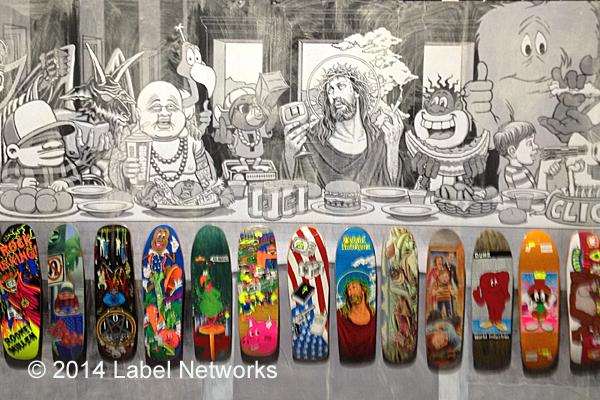 Skate art and exhibitions are a part of the Agenda Long Beach scene.