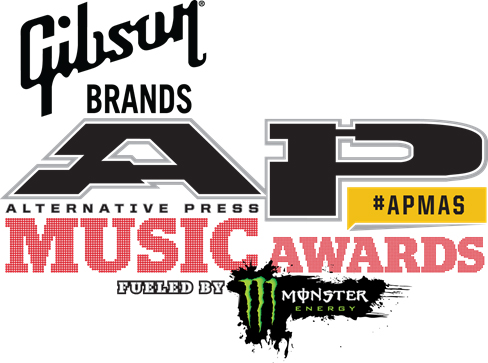 On July 21, 2014, Cleveland, OH, will transform into rock central not only because it’s the home to the Rock and Roll Hall of Fame, but Alternative Press (AP) Magazine’s inaugural music awards is so far, attracting an amazing range of musicians presently hot within youth culture markets.

Along with the line-up and expectations of artist awards are some of the leading-edge sponsors within the youth markets today.
Branded the Gibson Brands AP MUSIC AWARDS – Fueled by Monster Energy Drink, yesterday they announced even more special appearances by bands that broke-out into mainstream fame in large part thanks to the Vans Warped Tour. They include appearances by Paramore, Yellowcard, Fall Out Boy, All Time Low, A Day To Remember.

Others in on the scene will include the Misfits, Joan Jett & The Blackhearts, Brendon Urie of Panic! At The Disco, Sleeping With Sirens, Billy Corgan, We Came As Romans, Chiodos , and performances from Cleveland’s Very Own 115-Piece Contemporary Youth Orchestra.

According to AP, these world-renowned artists share an impressive combined 19 Alternative Press Magazine covers and more than 5 million-plus in U.S. album sales between them. Additionally, Machine Gun Kelly, previously announced as a special appearance, will now be performing live at the APMAs.

APMAs host Mark Hoppus of Blink-182 discusses his favorite memories and first recollections of many of this year’s performers, including Fall Out Boy, All Time Low and Joan Jett. Check out the video here.

Also, the legendary Misfits have posted a new video, inviting you to vote and join them at the APMAs. Check out the video here.

APMAs digital media partner AXS TV, also recognized throughout the industry for their recent and innovative live coverage of music awards shows and events such as Coachella, Lollapalooza, Stagecoach, and New Orleans Jazz Fest, has announced the APMAs broadcast will begin at 8 p.m. ET/5 p.m. PT on July 21, and will not only feature the entirety of the APMAs, but will also include exciting highlights from the red carpet pre-show (co-hosted by Automatic Loveletter frontwoman/The Voice season two runner-up Juliet Simms plus a very special guest to be announced soon). This live broadcast will also feature footage from the VIP boat party during the day, and will feature exclusive performances from rising stars Issues, Ghost Town and Marmozets.

Another massive collision is that the one-night event on July 21, 2014, held at the Rock And Roll Hall Of Fame And Museum at North Coast Harbor in AP’s hometown of Cleveland, also coincides the country’s premier touring rock festivals, the  Vans Warped Tour which will bring in performers Motionless in White, Marmozets, Yellowcard, Issues, and Mayhem Festival performers Asking Alexandria, Korn, Body Count feat. Ice T, Miss May I, and Frankie Palmeri of Emmure.

Fans can cast their votes in 12 different categories at www.altpress.com/apmas. Voting ends July 15.

Artist Of The Year Presented by Monster Energy Drink
A Day To Remember
Avenged Sevenfold
Black Veil Brides
Bring Me The Horizon
Fall Out Boy
Of Mice & Men
Panic! At The Disco
Paramore
Pierce The Veil
Sleeping With Sirens

Album Of The Year presented by Journeys
A Day To Remember • Common Courtesy
Avenged Sevenfold • Hail To The King
Black Veil Brides • Wretched And Divine: The Story Of The Wild Ones
Bring Me The Horizon • Sempiternal
Fall Out Boy • Save Rock And Roll
Paramore • Paramore
Sleeping With Sirens • Feel
Touché Amoré • Is Survived By
twenty one pilots • Vessel
The Wonder Years • The Greatest Generation

Song of the Year Presented by Epitaph Records
All Time Low feat. Vic Fuentes • “A Love Like War”
Bring Me The Horizon • “Shadow Moses”
Fall Out Boy • “My Songs Know What You Did In The Dark (Light Em Up)”
Falling In Reverse • “Alone”
Paramore • “Still Into You”
Sleeping With Sirens feat. Machine Gun Kelly • “Alone”