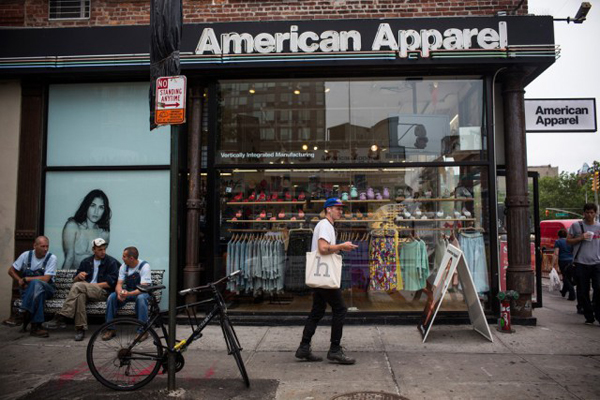 American Apparel stores (230) will be a huge part of the restructuring plans. Photo by Andrew Burton/Getty Images.

This has been the apparel saga of the decade as the bumpy ride of American Apparel, a teen retail favorite with more than 230 stories that revolutionized the concept of first-layer fashion and more, finally announced on Sunday, October 4, 2015 that they were filing for Chapter 11 bankruptcy.

In their statement, $90 million in debtor-in-possession financing will be provided with $70 million going towards restricting the company. They are also planning on eliminating their $300 million debt to $135 million.

The plan also includes restricting their 230 stores which they believe can be done in the next 6 months.

CEO Paula Schneider, who has been a controversial figure in the process, said, “This restructuring will enable American Apparel to become a stronger, more vibrant company. By improving our financial footing, we will be able to refocus our business efforts on the execution of our turnaround strategy as we look to create new and relevant products, launch new design and merchandising initiatives, invest in new stores, grow our e-commerce business and create captivating new marketing campaigns that will help drive our business forward.”

Overall, many attempts to make changes have been stuck from lawsuits filed by founder and former CEO Dov Charney and others to American Apparel factory workers who have been unsettled with the new leaders at the brand since Charney’s dismissal.

Under the new agreement, $200 million in bonds will be exchanged for equity interest.

Let’s see how this all goes down. As we stated earlier, under Schneider’s direction it’s clear that American Apparel is moving away from its edgy, sexy roots to a more Gap-like strategy and style. How this resonates with the youth marketplace in the future remains to be seen. Meanwhile, check-out how teen retailers are faring with the marketplace in our Youth Culture Studies 2015.