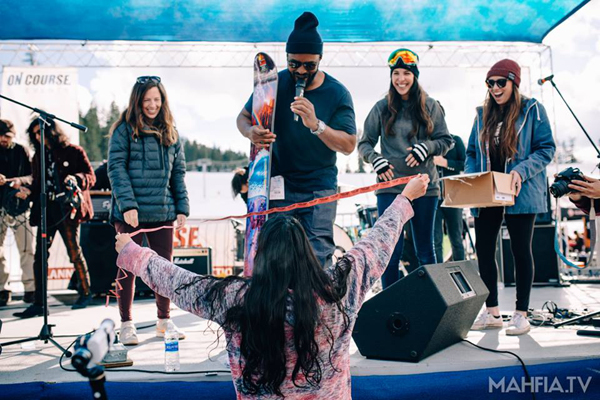 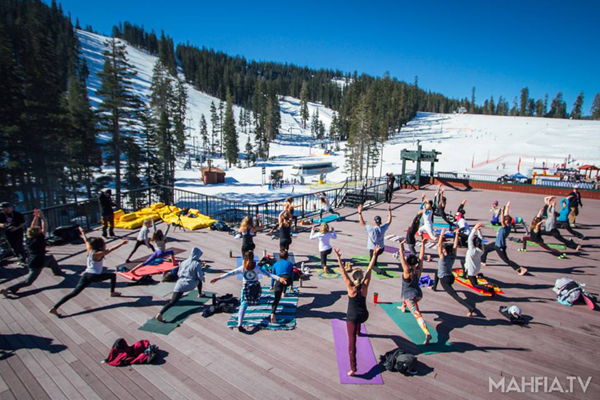 “We couldn’t have asked for a better day for the return of the B4BC Snowboard + Music Festival!,” says B4BC Co-Founder and Executive Director, Kathleen Gasperini. “It was a magical day with the top pro riders in the world showing up, amazing musical performances, photography from the best, and a super supportive vendor village of our long-time supporters all gathering for the cause.”

Sierra-at-Tahoe GM, John Rice agrees: “What a great day, awesome vibe, killer music, cool art, chill snowboarding, and watching legends hanging out with everyone on the Solstice Plaza. The 20th anniversary brought back all the great memories of B4BC in the past, everyone went home feeling good about being part of an amazing day in the sun.” 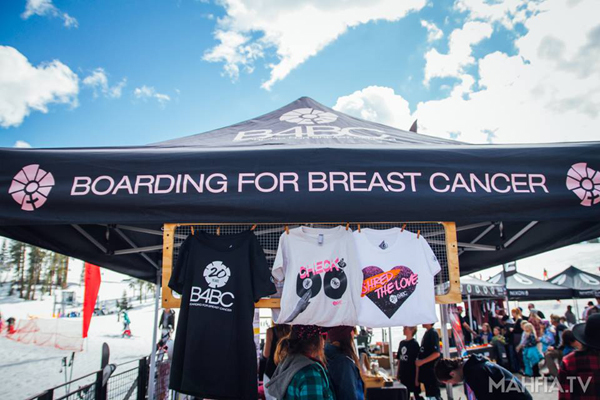 B4BC’s outreach booth onsite at the Festival was packed throughout the day.

To start the day, B4BC’s wellness ambassador, Megan Pischke, kicked-off the Festival with a 108 Sun Salutation yoga marathon. “I have done several yoga fundraisers over the years and now I was able to do one with friends for a cause that is near and dear to my heart,” explained Megan.

“The beautiful yogini Sherry McConkey helped me lead a group of magnificent people outside on the deck over-looking Sierra-at-Tahoe. We had DJ Ross, an sunshine to pump us up. The shred crew of Jamie Anderson, Hannah Teter, Chanelle, and Kjersti, and more had this little Zen garden going, with angel cards and glass straws in their drinks. And there were families, kids, and people who were genuinely interested in the yoga marathon, 108 Sun Salutations. A very inspiring 11-year-old Mia Jones did all 108 salutations, along with her mom Tiffany. This morning blew my heart wide open, and for me, was the best way to kick-off the B4BC 20th Anniversary Snowboard + Music Festival!” 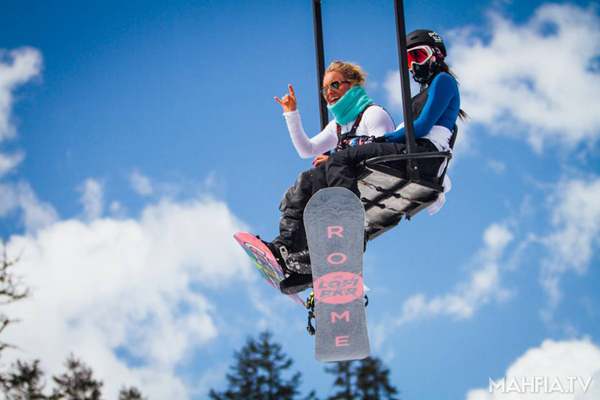 While music started rolling by noon, starting with local DJ AUX, legendary action sports host Sal Masekela kept the show rolling with his witty and humorous commentary, that both reflected on why we were there, and how snowboarding, music, photography, art, and community can rally for a cause and make a difference.

The Photo and Art Exhibition, curated by Trevor Graves and NEMO Design clearly ended up being the gathering place for legendary photo shoots with pro riders such as DCP, Jeremy Jones, Tina Basich, Jamie Anderson, and many others. The photography represented the best in the world in snowboarding, including a timeline tribute of the herstory of B4BC over two decades. 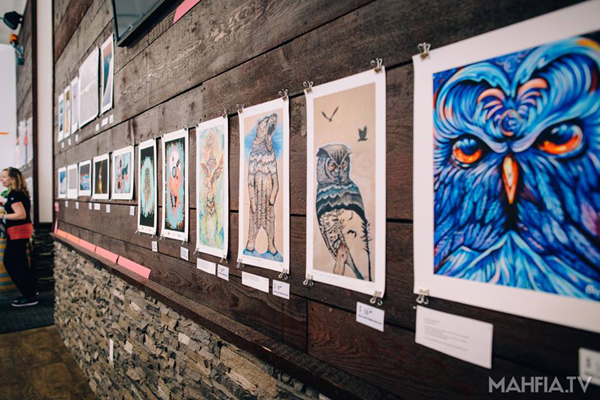 The photo and art exhibition, curated by Trevor Graves and NEMO Design, was the home base for interviews, portraits, and the gathering of the tribes of riders and industry leaders.

Every year, B4BC provides over 100,000 individuals with peer-to-peer education on how to reduce breast cancer risk, how to perform a breast self-exam and provides an opportunity to experience what a cancerous lump feels like through the use of life-like jelly breast molds. Outreach impressions reach 1,320,000 young people around the world annually. 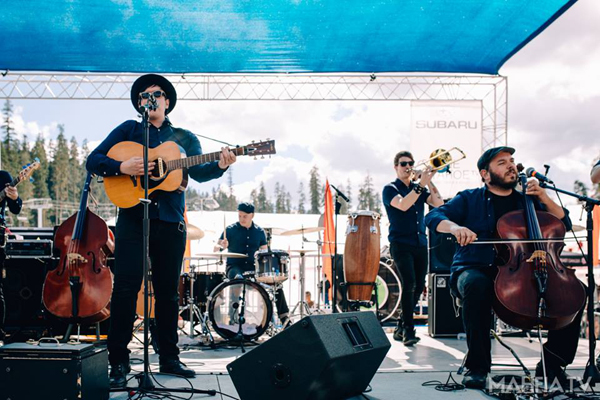 The Family Crest was among 3 bands that performed, including Panic is Perfect, EFG, and in-between, DJ AUX.

Due to the amazing success, B4BC and Sierra-at-Tahoe have agreed to continue the tradition of the Snowboard + Music Festival with plans already underway for April, 2017. 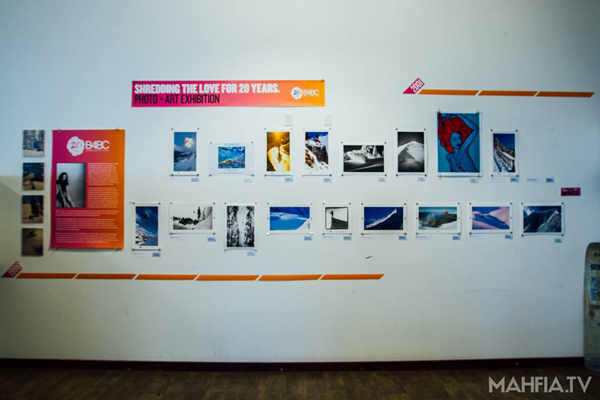 The timeline tracing the herstory of B4BC in the photo and art exhibition.

Check-out all of the incredible photos from the B4BC 20th Anniversary Snowboard + Music Festival here.

Here’s more about those that made it all happen:

About B4BC: Boarding for Breast Cancer (B4BC) is a 501(c)3 non-profit foundation that advocates early detection and a healthy, active and sustainable lifestyle as the best means for breast cancer prevention. Founded in 1996 with the 1st B4BC Snowboard + Music Festival, the foundation empowers young people to make positive choices that promote lifelong wellness through outreach, prevention and support programs.

About NEMO Design: Nemo Design is a brand design agency based in Portland, OR, creating modern marketing for the world’s leading active lifestyle brands. In 2015 Nemo was recognized by Ad Age as the Best Small Agency in the Northwest Region, silver as well as Outside Magazine’s Best Places to work, ranked 7 of 100.

About Sierra-at-Tahoe Resort: With 400+ inches of average annual snowfall, wind-protected slopes, incredible tree skiing, and 320 acres of backcountry terrain out the Huckleberry Gates, Sierra-at-Tahoe is the epitome of the authentic California snow experience. For beginner skiers and riders, Sierra offers over 100 acres of dedicated learning terrain, four beginner-only conveyor lifts and PSIA Certified Instructors. Sierra is the place to learn skiing or riding in Lake Tahoe. For freestylers, a commitment to innovative terrain parks has led to Sierra being recognized by TransWorld SNOWboarding as the #1 Best Value and a Top 10 Overall Resort as well as among the Top 10 Best Parks and Pipes in the nation. Sierra-at-Tahoe embraces skiers and snowboarders who want to escape from everyday life and enjoy the simple pleasure of winter in the mountains. For more information please visit www.sierraattahoe.com.