There’s no doubt that the inaugural AP Music Awards last night, July 21, 2014, could have also been called the Vans Warped Tour Awards or even, the Kevin Lyman’s Bands Awards. Many of the amazing bands that were represented got their start with Lyman seeing their talent and putting them on Tour for hundreds of thousands of new fans to see each summer.

But Cleveland truly rocked harder than ever at what is now known as the Gibson Brands AP Music Awards fueled by Monster Energy Drink. The event kicked off with a bang at the world-famous Rock and Roll Hall of Fame & Museum – highlighted by star-studded award presentations and once-in-a-lifetime performances by the world’s biggest and greatest rock ’n’ roll artists.

Hosted by Blink-182’s Mark Hoppus and broadcast live in its entirety by AXS TV, the event drew a staggering 6,000 attendees and trended worldwide on Twitter for nearly five hours – solidifying the APMAs as the newest and epic-in-scope live music event and award show. 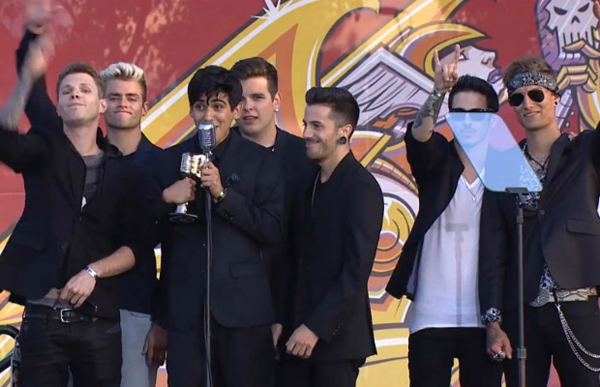 Mark Hoppus, Yellowcard present the APMA for Breakthrough Band to Crown The Empire.

The event featured a surprise appearance from Aerosmith’s Joe Perry, presenting the Guitar “Legend” Award to Slash (who first appeared on the cover of AP in 1988), as well as unprecedented performances such as a salute to Frank Sinatra led by Brendon Urie of Panic! At The Disco with Cleveland’s over-100-member Contemporary Youth Orchestra, Falling In Reverse with Coolio and Tyler Carter of Issues performing the rapper’s hit song “Gangsta’s Paradise,” Asking Alexandria performing Duran Duran’s chart-topping hit “Hungry Like The Wolf” with special guest Jonathan Davis of Korn, the Misfits performing “Dig Up Her Bones” and “Die Die My Darling’”, and “We Are 138” with Andy Biersack of Black Veil Brides and Joan Jett & The Blackhearts performing “Bad Reputation” with Billy Crooked of the Vacancies, “Soulmates To Strangers” with Against Me!’s Laura Jane Grace and a show-stopping cover of the Rolling Stones’ “Star Star” (“Starfucker”) with Slash.

In addition, All Time Low brought up special guests in the form of Yellowcard, New Found Glory and Vic Fuentes of Pierce The Veil for a groundbreaking all-star medley, including a performance of Song Of The Year winner, “A Love Like War.” 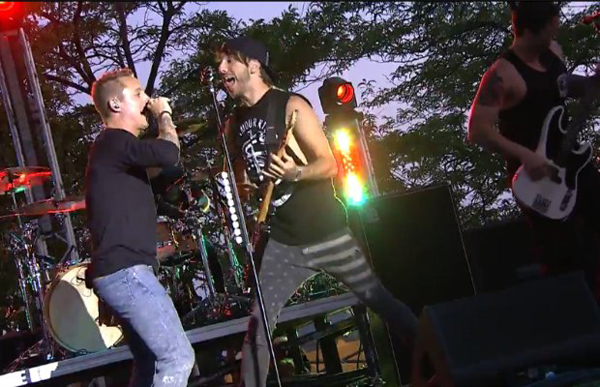 All Time Low perform at the APMAs with members of Yellowcard, New Found Glory.

The following is a full list of all APMA award winners: 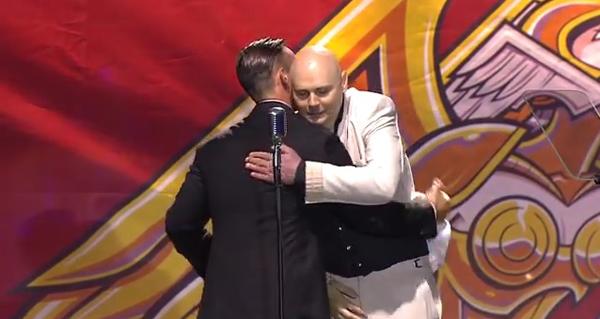 Additional appearances were made by Billy Corgan, Laura Jane Grace, Ice T and Body Count and Rock and Roll Hall of Fame 2012 inductee Slash, as well as members of Attlia, Bayside, Beartooth, Chiodos, Crown The Empire, the Devil Wears Prada, Echosmith, Emmure, Every Time I Die, I See Stars, Issues, Korn, Less Than Jake, letlive., the Maine, Mayday Parade, Memphis May Fire, Miss May I, Motionless In White, Neck Deep, Paramore, Pierce The Veil, Saves The Day, Silverstein, Sleepwave, Suicide Silence, We Are The In Crowd, We Came As Romans, the Word Alive, and Yellowcard.

Check out official videos and media from the APMAs at www.altpress.com/aptv.